Please consider all images as copyrighted and contact me for permission to use or reproduce. Thank you, DEC.

For most of us elephants have only two teeth – the tusks. But they also have a most interesting progression of grinding teeth. Elephants eat branches, twigs, leaves, and clumps of grass. At a minimum the diet is full of cellulose and in fact it is full of dust and dirt. The teeth are sandpapered away by the constant chewing of gritty food stuffs. An adult elephant will eat 300-600 pounds of vegetation each day – depending on the age and sex (relating to size) of the animal. A body that can weigh eight tons requires a great deal of input and provide a great deal of “output”. Wild elephants are never far from water and add about 30-50 gallons of water a day to the foods they take in.

When young elephants don’t really need teeth; they are mammals and they nurse from their mothers. But young elephants do get teeth as do young humans. These first set of teeth are not very important as the baby is mostly nursing. During its young life, while nursing still, they have that one set of teeth. For an elephant that is four teeth at a time, all molar-like; with one up and one down on each side of the mouth. There are no teeth in the front of the jaw either up or down (the trunk puts food back in the mouth and the lower lip is a bit prehensile as well. The first four teeth last a couple of years and a second set replaces them and lasts until the animal is about five-six years old. A third set is in place for another few years after that and the elephant first gets “real” molars in its young teen years. These teeth are deigned to last longer than those “baby” sets. The fourth set will be in place until the animal is about 25 years old. A fifth set until maybe forty and the sixth (and last) set will wear out very late in the elephants life. As a matter of fact the loss of these last four teeth (still just 2 upper and 2 lower molars) will cause the animal to develop a diet that is unsustainable and will eventually cause its death. The teeth of an elephant do not drop out and then rebuild from the jaw upward, rather they start in the rear of the mouth and move forward pushing the older teeth forward and finally off the jaw. So, four molars at a time with six sets in a lifetime equals 24 teeth overall plus two incisor teeth — those tusks. 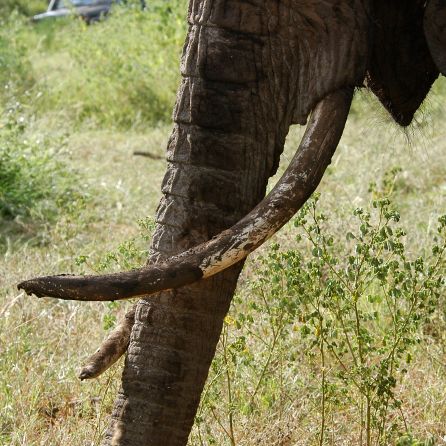 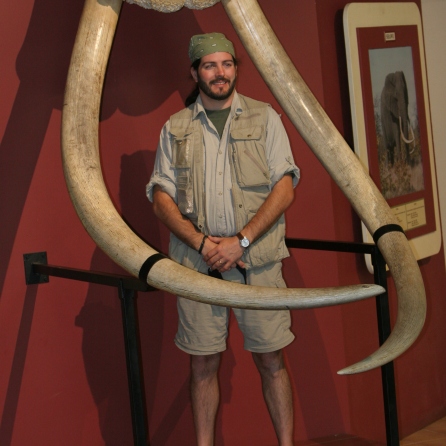 Tusks are not canine teeth though they are pointy. Canines are those sharp teeth that we have,and carnivores have, at the front “corners” of our upper and lower jaw. Your dog or cat has hunting teeth – canines and carnassials. Elephants do have long pointy teeth, two of them, but they are the upper incisor teeth; the ones you use to eat corn off the cob. We have eight incisors, four up and four down, but the elephant has only two; if that. The tusks have made the elephant a creature of great majesty, interest, and value. When considered from a human perspective the meat has had some, but little, value over the centuries and the skin has had no value; but those tusks are worth their weight in gold. The outer layer of enamel wears off when the tusk is very young and the outer, dentine or ivory, layer grows throughout the animal’s life. African elephants, both male and female can have tusks. In the past decade some 60% of the African elephants in Tanzania have been poached/killed for their ivory. And maybe 30% of elephants overall. South Africa with well staffed parks and anti-poaching patrols now has about 70% of the world’s wild elephants. This carnage has resulted in a couple obvious changes; 1) there are very few large tusked elephants left, and 2) those elephant families with “tuskless” genes are in increasing in numbers. The largest tusks are now often quite thin and may reach 100 pounds in weight which is about half the weight that the big old tuskers used to carry. Tusks are used to dig up mineral rich earth to aid in the diet. They also dig for water and roots and use the trunk to peel bark off trees. They are used as a resting place for the trunk and protect that trunk from outside damage. And yes, the tusks are used in fighting and defense though the massive body and legs and the very mobile trunk are the real weapons an elephant carries. 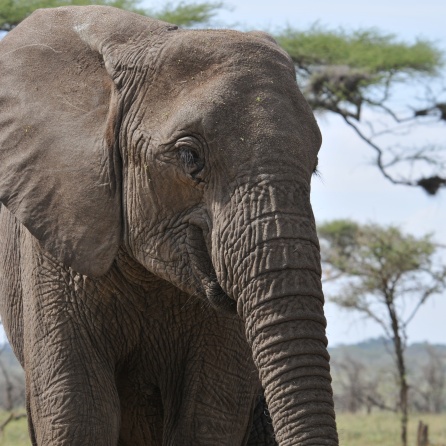 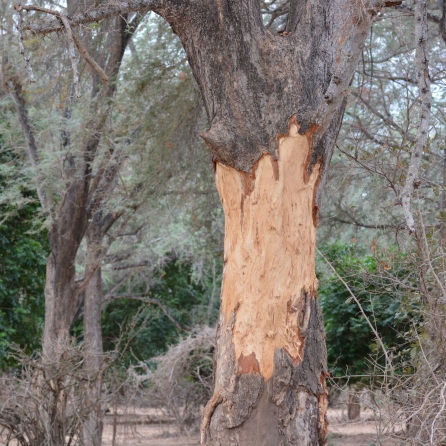 Tuskless elephants may be safer from poaching but long droughts which require the eating of branches and bark may impact the more that elephants with tusks. The future is not predictable but elephants may suffer from a mix of climate-induced habitat change and the loss of tusks. They can still break off branches and knock down trees so the impact may be seen through changes in the wooded savannahs and other treed areas.

There is on last thing to mention: the elephant graveyard. It was said by many that old elephants went to a location to die. These places were full of ivory and bones. Well, it never happened — but it happened all the time! How can that be? It is fairly simple; the elephants teeth wore down and they were unable to eat the usual coarse diet of grasses and branches. So, they moved to wetland edges where there was softer, moister, and copious vegetation. It was here that they eventually died. So, after hundreds of years there were places with lots of bones and ivory. But it wasn’t a graveyard it was a retirement community where life lasted longer for these aging toothless beasts.