Please consider all images as copyrighted; please contact me for permission to use these pictures.

I will be doing at least five pages on elephants (family, teeth and tusks, human interactions, water, and simply their majesty) over the next few days. This will likely open the door to many questions about other African animals and ecosystems which may or may not be answered over the next few months. Stayed tuned for more on African cats, antelope, birds, reptiles, and more.

Elephants are big, very big. A large male will weigh well over than six tons (to 13,800 lbs or 6,300 kg; which equals about seventy 200-pound humans). Females can approach four tons in weight. Males can be over twelve feet high at the shoulder. Their great size, tusks, trunk, and large ears make them unlikely to be confused with any other animal even at a great distance. They are gray overall in most cases though the skin tones are set by melanin and will vary from pale gray and brown to nearly charcoal; though the primary color that they show often represents the soil and dust of the area rather than the pigmentation of the individual. Many elephants show pinkish splotches of poorly pigmented skin. They are quite hairy when born but show hair on the tail, chin, eyelashes, and trunk as they age. Not all mammal taxonomists will say that there are two species of elephant (pygmy/forest and African/bush) but all do agree that this animal can easily establish habitat-specific variations that show in a number of “populations”. They are quite plastic in an evolutionary sense but have remained “elephant” despite these adjustments.

In the images below you can see that young elephants are relatively small, tuskless, and seemingly unable to control their ears and trunks. They are cute and a bit goofy. They are always with a trusted family member; usually the mother but occasional an older sister or a younger aunt. Elephants are very touchy-feely. Youngsters are surrounded by family as they rest, feed, walk, or wander. They have the ultimate helicopter family. The small elephants are often a bit independent but only within the circle of their ever watchful family/clan/group. 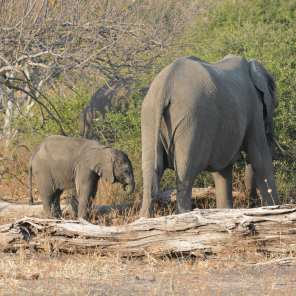 The family is matriarchal – momma rules! The females will have their first youngster when they are (at least) 8 years of age, though some females will be twice that age before their first baby. After the first youngster the females will become fertile (heat or estrus) every 3-9 years. Once a female has a baby she starts on her on journey as a matriarch. The young female is likely to have stayed with her own mother, closely with her mother, during her ten years of childhood. Once the daughter has her own baby she will be the mother and matriarch to the baby. But she will usually remain attached to her own mother as well. Thus the group grows and grows; sisters and cousins, mothers and aunties all together with a range of youngsters. There are conditions during which the families will split up and seek food and water on their own, but there are also times where the smaller family units will unite and reestablish relationships. A bit like a holiday reunion for us.

The young are born after a gestation period of about 20-22 months and will be nursed for just under two years before they master the browsing techniques that the adults use. Most females lactate for at least four years and the young take advantage of this opportunity less and less as time passes. They can survive on browse (thorns, leaves, bark, twigs, wood for the adults but mostly grasses, buds, and leaves for the young) before they are two years old but will nurse as long as the female allows it. Some females, especially those with 3-5 year birth cycles, may lactate most of their adult life.

Most any group of elephants will have smaller ones inside the outer perimeter. In most cases there are no enemies threatening these large animals and the youngsters are given whatever freedom they want. But, within the female-based group there is a great deal of communication and the females are aware even if the youngster wanders off a short distance. They use infra-sound to keep track of what’s happening. This is also the kind of sound a receptive female will emit to announce her condition to area males. This “rumbling” wasn’t identified as communication until the mid 1980’s.

In the image above there are elephants with different shoulder heights in three of the pics. These are often animals that are related and were born about 4-5 years apart. This is typically how a family grows. The young males (middle picture, lower row) are often urged to leave the matriarchal group when they are between 9-12 years old. This is the age of elephant puberty and though they are still very low on the testosterone totem pole they do become a nuisance amongst the family of ladies and children. So, as they rough-house and react to females in heat they are chased off to fend for themselves. Males don’t form large associations but smaller groups are not uncommon. Often an older male will “train” a youngster in the ways of masculinity. In South Africa there is a park named Hluhluwe (“shhla-shlewee” in Zulu, which is the name of a thorny “climber” vine) (actually the park is now called iMfolozi) where elephants were transplanted. The elephants were brought in originally in non-family groups and the young males, with no older male leadership, became delinquents and marauders and killed several of the white rhinos in the park. It seems that young males, even away from their family, continue their education and development under the guidance of older animals.