The Southern Alps are a bit of a surprise. The country of New Zealand consists of a couple medium sized islands and lots of smaller ones. It has been submerged and lifted by tectonic plates for tens of millions of years. It is known for kiwi birds and Maori people. The giant Moa once lived here; sailors and whalers visited in the 18th and 19th centuries. Captain Cook and Charles Darwin dropped in. It is a smallish sort of place and to have an active mountain range with glaciers, rivers, and earthquakes is a bit of a surprise. Getting to the glaciers is a bit of a challenge as well. There are few roads that cross the mountains and allow access to the western side of the South Island. There are only three passes.

Cook, along with Joseph Banks and Daniel Solander, arrived off the coast of New Zealand in October of 1769. This was an extension of the trip that took the Endeavour and its crew to Tahiti to observe and document the Transit of Venus in an attempt to create a reliable method to determine longitude. Darwin was in New Zealand for only nine days very late in 1835; however the Captain of the Beagle Robert FitzRoy was later the second governor of New Zealand. The Beagle anchored in a harbor that was not much more than a swarm of bars and brothels. FitzRoy and Darwin did spend a day inland in what they referred to as an oasis of English civilization.

Anyway, the Southern Alps are a surprising mountain range along the western side of the South Island. They are easily explained in light of the plate tectonic theory. There is a plate moving from the west that is grinding its way under a plate that is to its east. This subduction event creates a buildup sea floor stuff (in this case greywacke and argillite stone) and occasionally pops a volcano or two along the way. Just onto the North Island stand a large volcano, Taranaki or Egmont, easily seen as one flies to the North Island. The North Island has many volcanoes and volcanic fields; like Auckland Volcanic Field and the Taupo Volcanic Field with Ruapehu as the largest peak and highest peak on the North Island of any kind.

The Southern Alps are high enough to still have permanent glaciers and evidence of expensive glacial activities over the past eons. There are a couple glaciers that one can visit by driving all day from Christchurch and spending the night before driving back. There are only three roads that cross the mountain range and get you to the west coast, so ease of access is not part of these outings. The Fox Glacier is rapidly receding in our modern climate and is largely buried under its own load of mountain debris. The Franz Joseph Glacier is also receding but is reachable and viewable from many vantages. The braided river stream is ample evidence that the glaciers have carried countless millions of tons of rock down from the mountain over time. The greywacke is riddled with quartz intrusions and the rock is falling to pieces right in front of you. 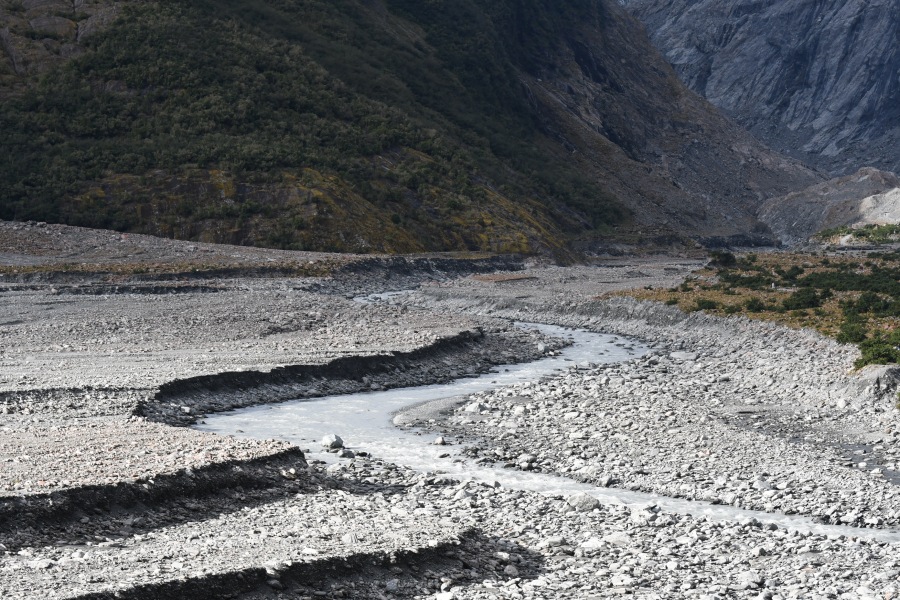 It is a lovely walk to and from the Franz Joseph Glacier with many kinds of tree fern and regular ferns and the Nothofagus (Beech) trees along with Bellbirds and Tomtits to brighten the passage. The vistas are grand, the stream bed complex and compelling, and the glacier itself is a snowy treat slipping down the mountain. I like geology more that I ever thought I would and it seems that geology allows for so many explanations and ideas to fall into place. New Zealand is rich in earthquakes, volcanoes, mountain building, mountain eroding, coastal plains and shelves, and much more – all easily seen.