There are several glacier-formed fjords (Norwegian spelling) along the New Zealand’s South Island’s western side. Few can be reached without great difficulty. Those of you who have a fear of heights or twisting roads may think that none of them can be reached with ease. The rides to Milford Sound (and Doubtful Sound – see separate blog page) are spectacular and the geology is raw and personal. In the rain there are hundreds of waterfalls; sometimes hundreds in view at once. In the sunshine it is breathtakingly beautiful to drive to and then ride on the sound. 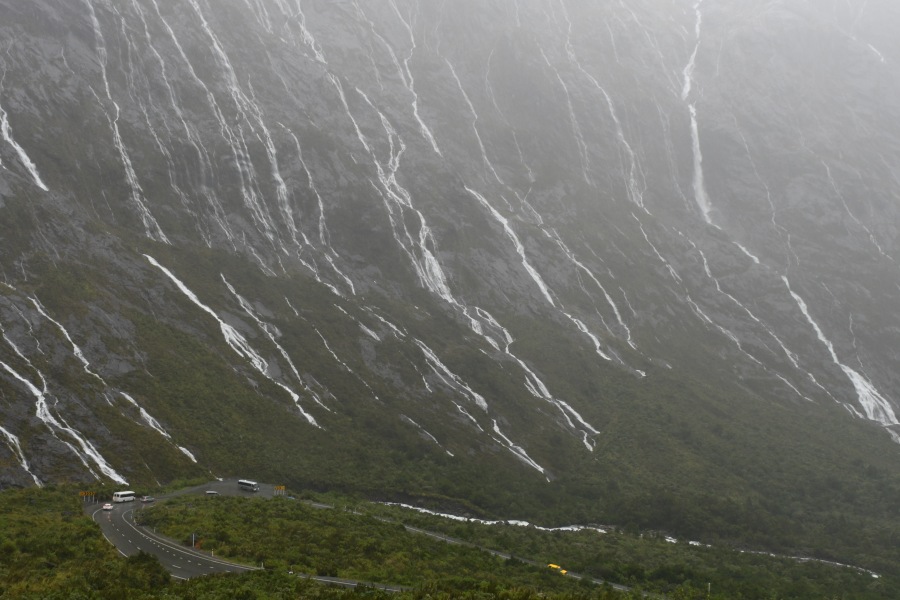 The ride to Milford Sound is not short. You have to pass through farm and pasture land where sheep, dairy cows, and red deer are grazing before reaching the edges of the native Nothofagus forests. Then it is onward and upward to the tunnel that takes you through the last part of the greywhacke* mountain range and dropping you downward, steeply, to the coastal edge. The tunnel, the Homer Tunnel, is about 0.75 miles long (1.2km) dropping about 400′ before opening on the western side of the mountains.  It was opened in 1953 after being started in 1935. It was conceived in 1889 by the founders of the saddle that served as a pass through this region. 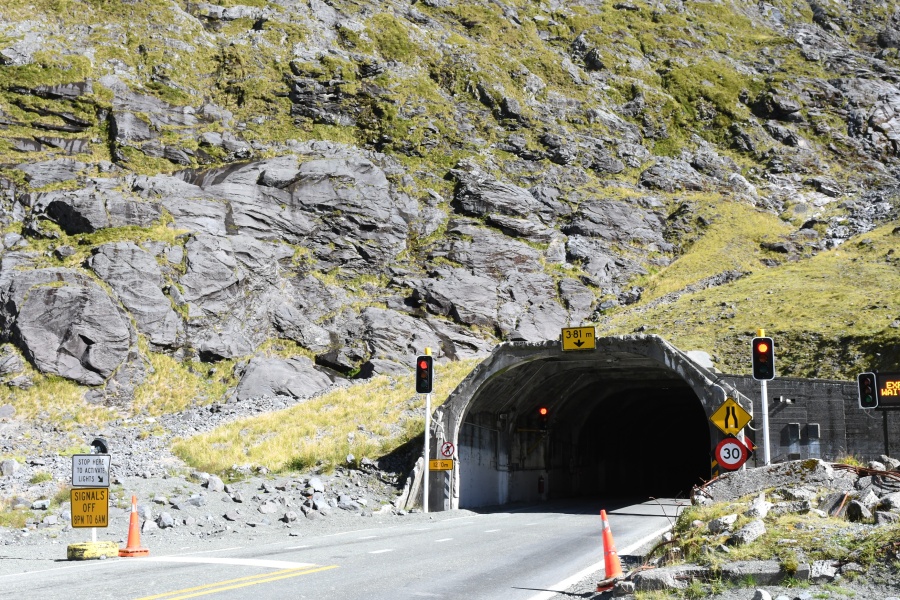 The two valleys in the area of the tunnel, The Hollyford and the Cleddeau are about 2500 feet wide at the bottom and have nearly sheer walls rising nearly 3000′ vertically. This creates a marvelous bowl as the tunnel begins and a grand visit as you exit on the western side. Snow slides in this area, or the blast of compressed air from the descending slides, are good reason to keep this road closed in the winter. There are vast snowfields in the mountains above the tunnel and roadway.

Milford Sound itself is a steep sided passage carved out of argillite and greywhacke (and some granite as well) by glaciers. The fjord is about 9.3 miles long (15km) and quite narrow. It is the most famous tourist attraction in New Zealand with at least 550,000 people visiting each year. In some years it is nearly a million. The surprise to most Americans and Europeans is that there are almost no overnight accommodations in Milford. Almost everyone is bussed in and then bussed out each day. It is not really a playground but rather a treasure that is pretty well guarded. 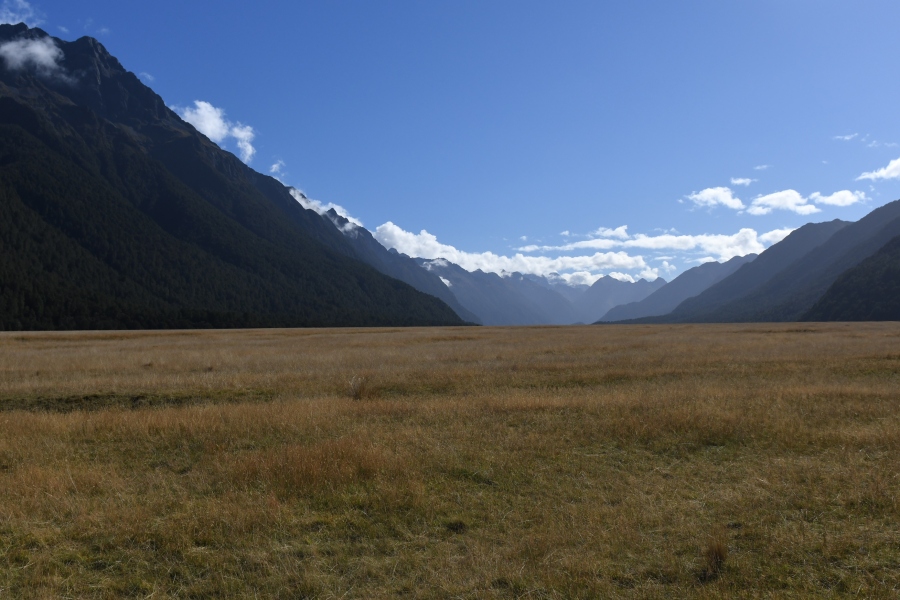 The ride in and out provides a lesson in glaciation and its impacts. There are bare rock, steep-sided mountains, hanging valleys where glaciers once flowed, and valleys more than a thousand feet deep filled with glacial debris. The mountains, as they fall apart, present stone, sand, silt, and clay to be washed downhill. Much of this debris is created by the grinding of today’s glaciers on the mountain tops and some is from temperature changes that expand and contract either/or both water or stone. Expanding ice cracks the already fissured rock throughout the winter. 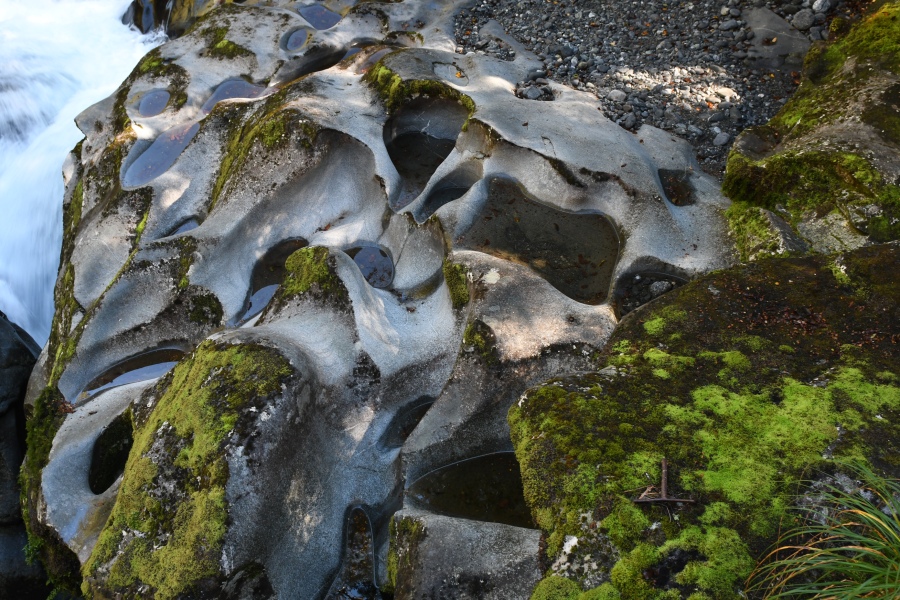 You can fly in and out – or just out – and get a chance to see the grandeur of the Southern Alps. These young mountains are still growing as the Indo-Australian Plate inches under the Pacific tectonic plate. The mountain grow and erode at about the same rate. The stone being raised from the ocean floor is quite fragile and the layers and schists break apart and erode away easily and quickly.

*Greywhacke is an old sandstone mostly formed as part of very ancient sea floors and now uplifted by tectonic actions to form the bulk of the Southern Alps. Some of the greywhacke found in New Zealand ages out at more than 300 million years. It is very much fractured and deformed and is just riddled with fine lines of white quartz that has intruded into the fractures. It is a rather hard rock which is a dark gray or black. It is often mixed with or in conjunction with ancient mudstone (argillite) as well.