Birds can be a nuisance for beginners; many are cryptically colored or patterned, many are small, many are always in motion. The birds of the galapagos are different: are big, obvious, relaxed, and common. People who are not into birding soon learn them and marvel at them. The adaptations allowing them to live in this remote oceanic environment are easily seen and understood. The idea of random arrival and adaptation leading to speciation (evolution) is simply laid out in front of the visitor. The Galapagos make science understandable.

Remember that there are many islands (usually said to be 13 islands with about 48 islets and rocks) out in the Galapagos chain. The birds, reptiles, and insects can be specific to on island and not found on all of the islands. If you want to see all the birds you need to get to as many islands as possible; a longer tour is required. The total land area is about 4,900 square miles (7,880 sq. km) and the total oceanic area in the Galapagos is about 28,000 square miles (45,000 sq. km).

So, here are a few of the most obvious. 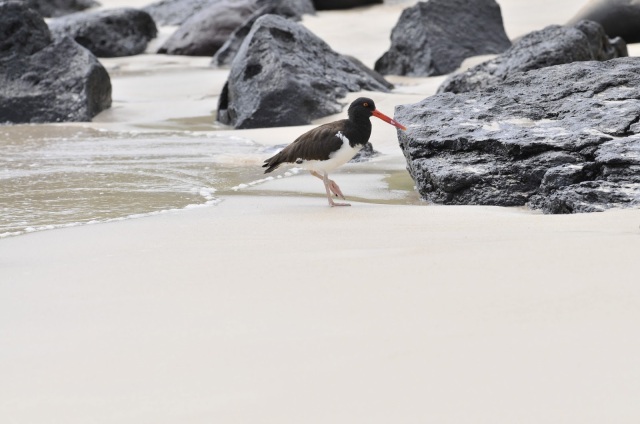 The birds shown above and below are the American Oystercatcher and the Whimbrel. These are much larger than the Least Sandpiper. The black and white oystercatcher is a non-migratory resident of the islands. They can be seen on most coastal areas including both sand and beach. The young are precocious and begin to wander and feed them selves within a few hours of hatching. The long colorful bill is very flattened vertically and allows the adults to probe into the sand and even, as the name suggests, in bivalves.
The Whimbrel is a long-distance migrant. The bird is found as a nesting species in parts of far northern Canada and Alaska. There are European and Russian subspecies that developed (probably) during glacial isolation. The European and Siberian birds winter in New Guinea and Australia. the Alaskan and canadian birds winter along the coast of Central and South America halfway down Chile on the west and Brazil on the east. They are annual in the Galapagos and are seen in all months. The birds here in the breeding season are (most likely) first year males. It sometimes takes the boys an extra year to grow into the role of parent. 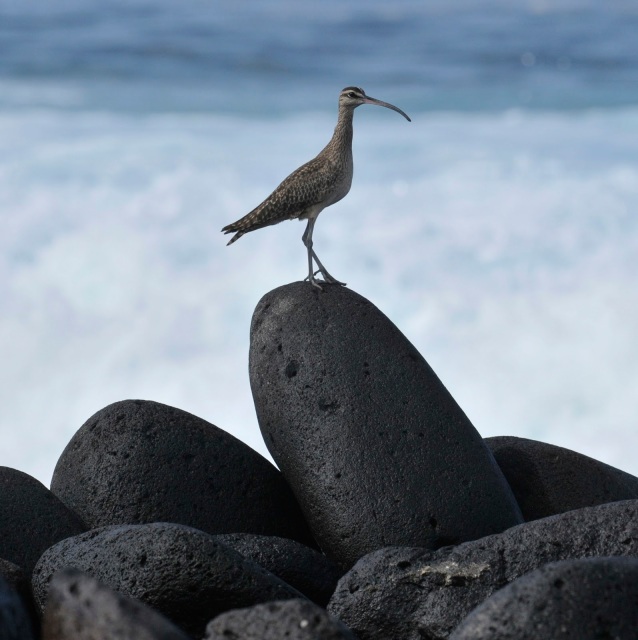 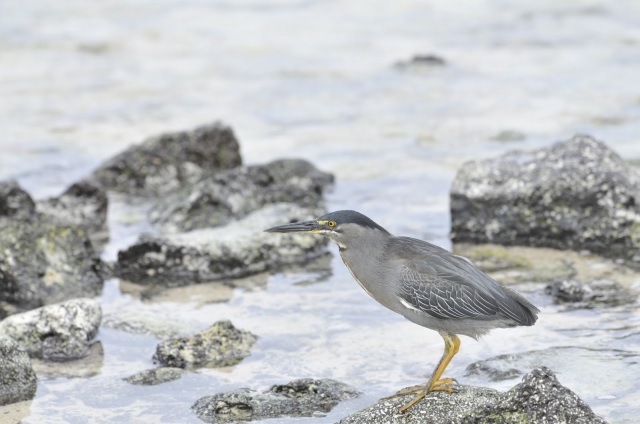 The Green Heron (or Striated Heron) is a worldwide super-species with representatives on every livable continent. The Green heron of the US is nearly the same in all facets and dimensions. This group of populations has been split and lumped by taxonomists off and on for decades. Sometimes the bird shown above goes by the name Striated Heron.
The American Flamingo is American in a western hemisphere sense not a USA sense. In the US we occasionally see zoo or park escapees but rarely a bird thought to be a natural vagrant. This bird breeds in modest numbers in the Galapagos where there are probably only 500 of them. They breed in the northern South American countries of Columbia and Venezuela and islands like Cuba, Hispaniola, and the Turks and Caicos.
They are unmistakable in appearance. In feeding they somewhat resemble baleen whales. They turn the head downward and draw water into the mouth and then push the water out through baleen-like filters along the sides of the mouth, catching little things inside. The tongue works like a bilge pump moving up and down (or in and out) to draw and expel water. They live into their thirties and breed from about five years old onward. 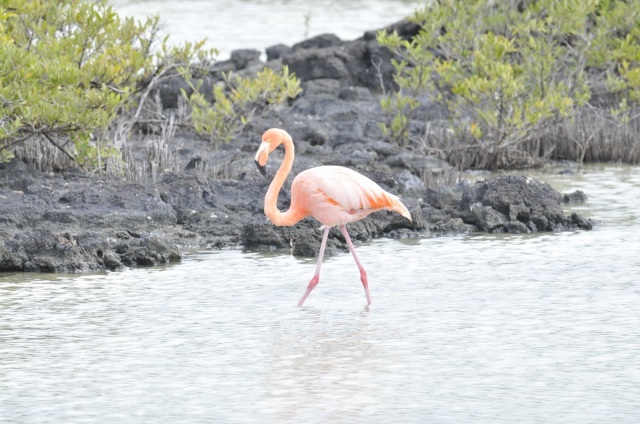 There are two frigatebirds on the Galapagos; the Magnificent and the Great. the one shown below is a female Magnificent and the second one down is a male Great Frigatebird advertising himself. Both species are long-winged and make a living as thieves; they are known as kleptoparasites. The harass and steal food from gulls, terns, boobies, and tropicbirds. 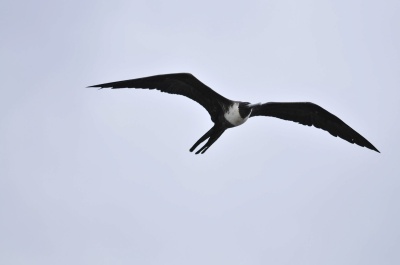 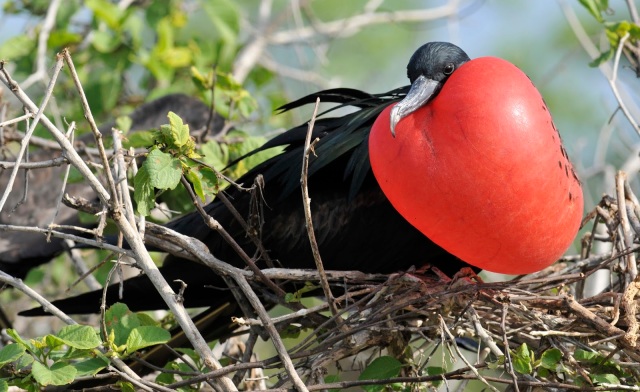 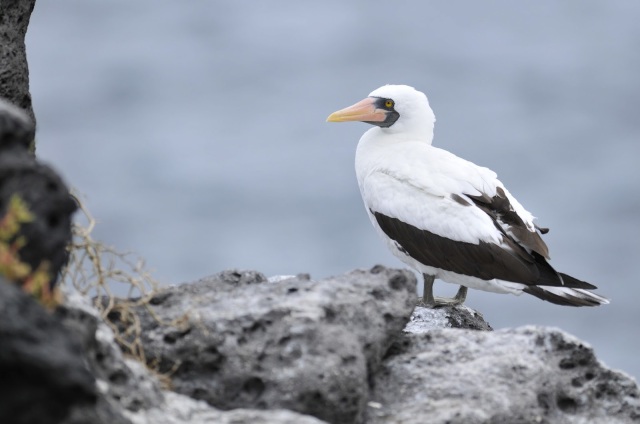 The Galapagos are famous for the three species of booby that live there: there are the Red-footed, the Nazca, and the Blue-footed. The Red-footed is the least common and has the softest appearance; I am not including a photo of this bird. (ps – there are two color morphs of the Red-footed Booby; white and brown)
The bird above is the Nazca Booby. In the old days it was thought to be a form of the Masked Booby which is quite widespread, but it has been awarded species status for a variety of reasons. It is a bird of the rocky coast at least as far as we are concerned. It nests and sits on rocks at the seaside. When feeding it travels well offshore and is rarely observed.
The bird below is the iconic and goofy Blue-footed Booby. The blue feet are signs of good health and are displayed by the male for the female to assess. She also has blue feet and they may attract the males attention. Her feet are a darker blue than the males. The Blue-footed Booby plunges into the water from 30 to 100 feet above the surface and catches fish once under water and on the way back to the surface. A snorkeler can be startled by the silvery flash of an arriving booby as it enters the water at great speed (to 60 miles per hour!) and will often plunge to a depth of 50 feet (maximum about 80 feet). Blue-footed Boobies feed close to shore and are skilled enough to dive into water that is only a few feet deep. 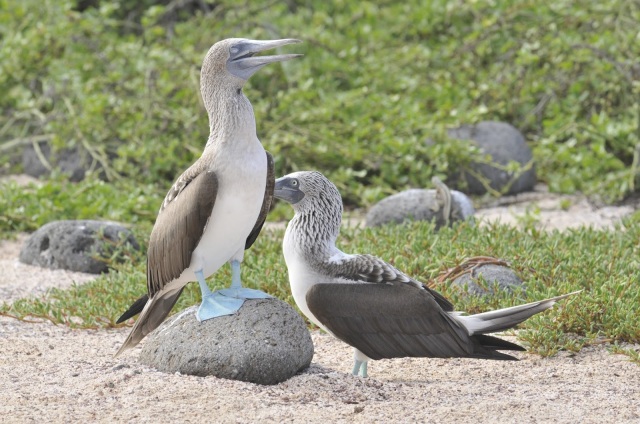 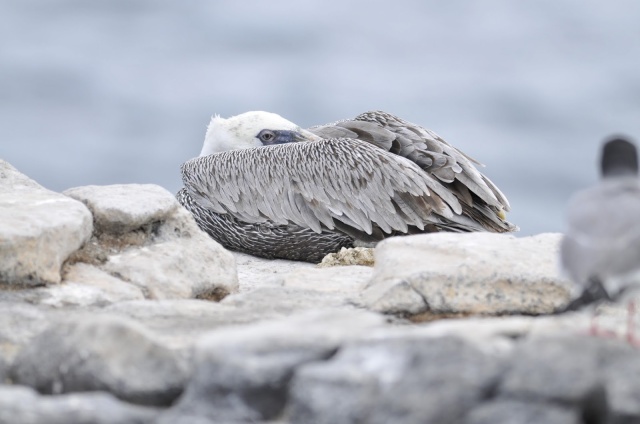 At some point I will do another page on the Red-footed Booby, Red-0billed Tropicbird, Brown Pelican, and the Lava Gull & Lava Heron. These are less frequently seen but are also birds that many visitors encounter.