For those of you interested in Galapagos Island postings I refer you back to February 2011 postings for more and different blog postings.

The Galapagos Islands are an archipelago of volcanic islands above a hotspot located about 600 miles off the west coast South America. The islands have long been part of Ecuador and straddle the equator. They are located on the edge of the Nazca Plate. This piece of the earth’s crust is moving to the east southeast at about two and a half inches a year. The hotspot plume has been in this location for millions of years creating volcanic islands as the plate drifts by. The older islands have ridden the plate to the east and the westernmost islands (Isabela and Fernandina) are still actively volcanic. Many of the older islands (those to the east now) have eroded until they are seamounts no longer reaching the oceans surface. Such is the life of hotspot archipelagos. Hawaii is moving in a different direction but has the same array of characteristics. Iceland, Tahiti, Reunion, and (surprisingly) Yellowstone are all part of mantle plume hotspots. The Galapagos are moving slowly eastward, measured in inches a year, which is quite rapid for geologic motion. Most visits to the Galapagos Islands include a flight into Baltra (from Guayaquil or Quito) and then a boat of some sort from there on your excursion. If you are planning a trip – do a lot of research; and there is a lot of information out there. The trips vary in length and the itineraries are assigned by the National Park Service. The boats go where they are told and only to places where they are allowed. Even residents cannot jump in a private boat and head off to a remote beach for an afternoon on the sand.
The marine mammals of the Galapagos are most obviously represented by the Galapagos Sea Lion. There is also a Galapagos Fur Seal (anatomically another sea lion, not a seal). The whales and dolphins are usually found to the western end of the chain where the waters are cooler. Whales will include the following baleen whales; Humpback, Minke, Bryde’s, Sei, Fin, and Blue. There are several places where Sperm Whales seem to gather annually. But, these big guys are scattered, not common, and often in areas that are off limits to touristic boats. In other words, on a few day or even one-week, outing you are not likely to get good looks at whales. Dolphins are another story. Bottle-nosed Dolphins are quite common and widespread and will be seen riding the bow wave of many vessels. There are also; Spinner, Pantropical Spotted, Risso’s, Short-beaked Common, and Long-beaked Common Dolphins in the area.
The older seals rest and when they are done they force themselves to rest again. The mothers will nurse young, the males may look over the other males, and the youngsters waddle at the surfs edges. All in all they are very placid and appealing. 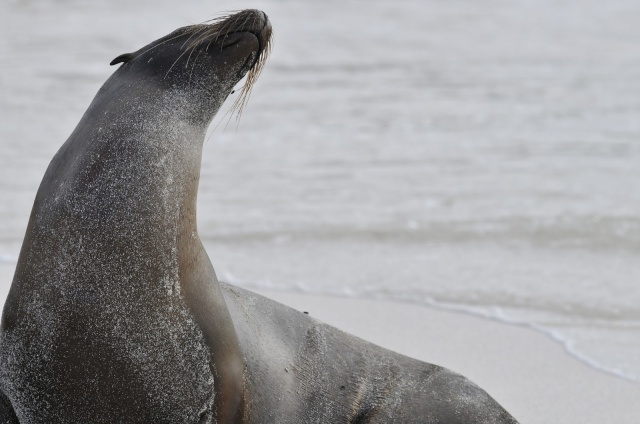 However, they do make use of any area where there is fish and a convenient haul-out spot. In the image below Flat David has joined the group of sea lions that has left the water to loaf about in downtown Puerto Arroyo.  They don’t bother people in a confrontational way but there are no pooper scoopers associated with these guys and the (flushing) afternoon rains are appreciated. 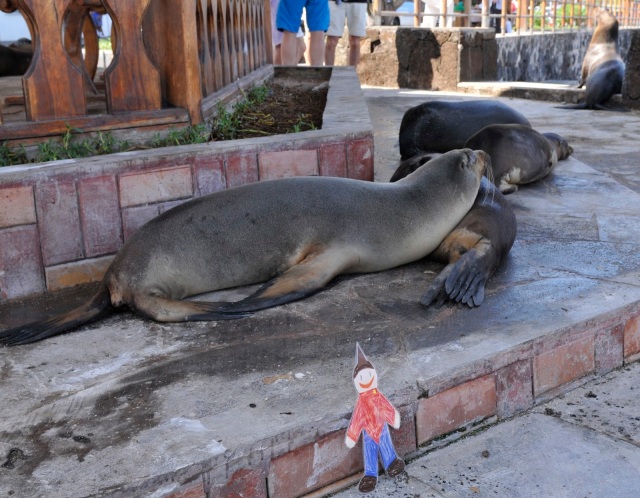 On the islands they are found on sand, rocks, or in vegetation. Below a youngster hangs out near Mom on a rocky vegetated area. 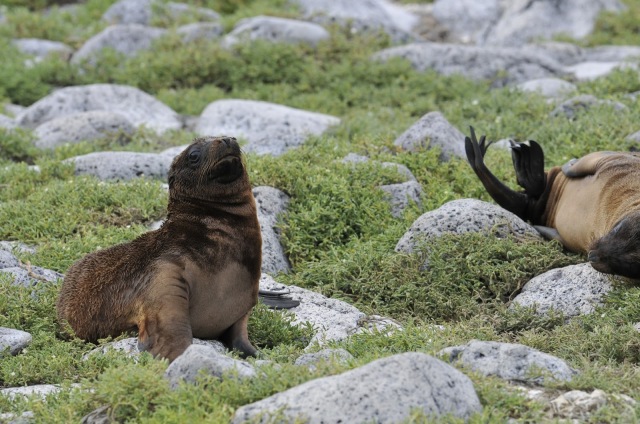 But they are most at home in the sea. Here they can do whatever they imagine. They are streamlined and waterproof. They are adept and adroit. They are just right for a life in and along the sea. 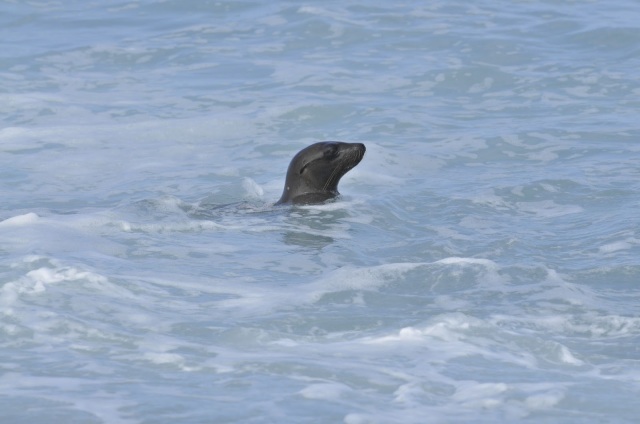