Skip to content
This is about as far south as people seem to be able to live. It is more than 1000 miles from Australia and quite a bit further south. The flight from Sydney is about 2.5 hours and we arrived in the early afternoon. Jack Clyne met us and we were in the Rydges Hotel by 3pm or so. After an introductory talk I had the chance to go next door and buy a telephone calling card. For $10 I have 567 minutes of calling time to the US. So, for less than two cents a minute I have more time than I can use – it is a bit more more from hotels or from cell phones – but I will still never use up the minutes.
The arrival Day in Christchurch was glorious; sunny, brisk, and clear. After arrival we had free time so I went to the botanic gardens and walked about. The plants are very nice but the birds are all British. Of the 15 species I had, 11 were introduced European birds. The vegetation is also from Europe. The two birds below are the Blackbird and the Chaffinch. 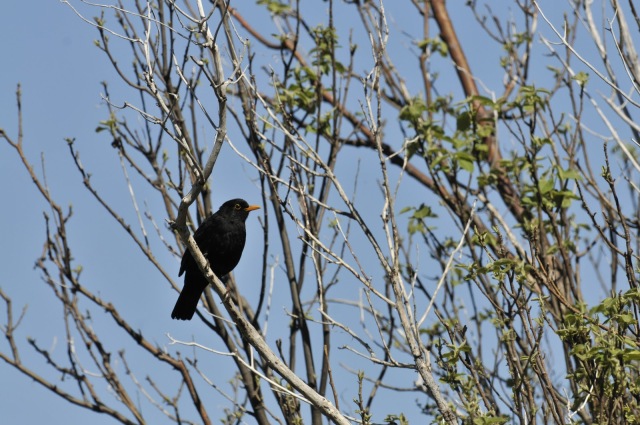 As we headed out from town I almost never saw any native plants. This country has been a lonely island for 83 million years and was renowned for its unique plants and animals – that is almost gone now. Sadly the same thing has happened to the Hawaiian Islands chain and would have happened to the Galapagos Islands as well if they were just a bit more hospitable. My hero, Captain Cook, brought goats and pigs to New Zealand and probably rats and cats as well. The plants were brought by colonials as were the birds that now dominate the scene.
New Zealand only had birds, no mammals and only one reptile-type, an ancient lizard that predated and then survived the dinosaurs, called Tuatara and a couple primitive frogs. Many of the birds were flightless (the five kiwis for example) and many others nested on the ground – there were no predators. That changed quickly with the Pacific Rat brought by the people who became the Maoris in about 1300 and by the sailing ships which brought Norway and Black Rats and later by the settlers during the 1600 and 1700’s.

The biodiversity here has been hit hard and there are few areas of extensive native habitat. On the west side of the Southern Alps there are large expanses of Nothofagus forests and some small areas of Podocarp Forest, but that is about all that remains.
Our second day was pretty dismal weather-wise. It was windy, cold, and rainy all day. We were in and out of buildings and museums so it was doable, but not pleasant. There is a river (Avon) that winds through town, traversed by forty bridges, and there are boats (punts) that you can ride in and be poled along the river by “polers” in Edwardian costume. It is a bit much but always a hit with some people – but not in the rain and wind.
The next morning we were up and across the Canterbury Plain and then on to the spectacular mountains along the western side of this, the South, island. The Canterbury Plain is highly agricultural and though is was all sheep a decade ago is is now a mix of cattle, deer, and sheep. There is more money in dairy and probably more money in deer meat, which is sold mostly in Germany, as well. Sheep numbers have declined by about 50% during the past few years; from almost 80 million to about 40 million throughout the country.
We stopped at a sheep farm and had delicious tea, scones, and breads. The couple that owns the farm were away but two of their friends and their daughter greeted and entertained us. Brian did the shearing of a sheep and ran his dogs. He traveled in the USA shearing sheep for a few years as the skill was lacking here. He was part of, along with a few other Kiwis, a shearing team and traveled around sheep areas in the southwest. He worked in California near LA and through Southern California and a bit of Arizona. His group and a few Mexicans spent the season working flocks that he thought were owned by Basques. He had a ball and remembers those years very fondly. He wanted to buy my Swarovski binoculars as they cost more than $4000 here in New Zealand. I never found out if he wanted to watch his sheep or birds.

The marino has fine, small-barbed wool and makes the softest clothing.

Brian started with a rather dirty and wooly sheep…. 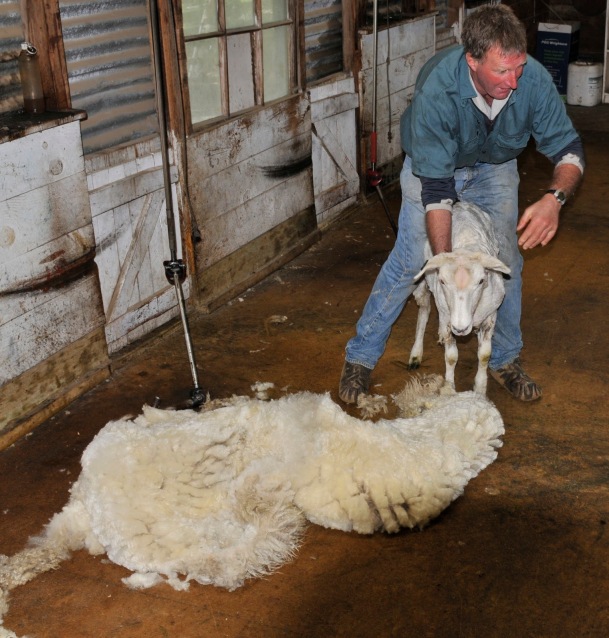 and ended with a wool coat and a small animal.
We then headed off into the hills and to the foothills and are now spending the night at the base of Mount Cook; a spectacular snow-covered peak that rises almost 10,000 feet from where we are staying. Today was rainy as we left Christchurch but became glorious as we headed south and west. The sun stays on the mountain until the last second and even after sunset it is illuminated with the glow of western light. It is a wonderful scene that can be witnessed from every window in The Hermitage. The dinner was very good; roast lamb and other meats, salads, fruits, great vegetables, and several indian dishes. Everyone seemed to eat way too much.

This image is from my room… pretty nice.
We had one couple take the helicopter flight up and around Mount Cook. They were up for an hour, landed twice on glaciers, and were thrilled beyond words with the outing. It was a very good day to take the flight and it must have been simply breath-taking up there. We will spend the next few days between Queenstown and Milford Sound. I will photograph birds in Queenstown and we will take a boat ride in Milford Sound that almost reaches the richest area of ocean in the world for shearwaters, petrels, and albatrosses. We will stop short of the ocean – but maybe some birds will be identifiable. Last time I was here there was a flightless rail, the Weka, at the boat dock. The Weka is below and a Black-billed Gull is below that. 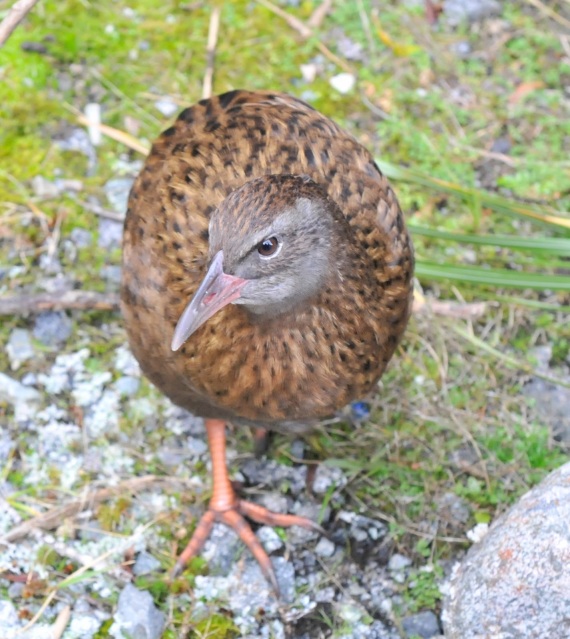 More from Queenstown. I have a poor wi-fi connection here and want to try to post this —