Skip to content
Today was the Milford Sound day – what a day. Glorious weather, a great boat trip, and I got to take the small plane flight that returned some of us over the Southern Alps back to Queenstown. The flight was $375 but we paid $325 as we were the after-four departure (go figure). The weather was clear as a bell and the visuals of these mountains were stunning. The ride from Queenstown to Milford Sound takes a bit more than five hours and could take more if you stopped for every photo opportunity. It is a wonderful ride.
In Milford Sound; not a town but really just a dock and departure building, we boarded the Milford Mariner and grabbed a box lunch as we headed out. There were quite a few Fiord-land Crested Penguins and also a few Cape Pigeons (Pintado Petrels), a Southern Giant Petrel, a few Australasian Gannets, and two Southern Royal Albatrosses. There was a single Bottle-nosed Dolphin and a few juvenile Southern Fur Seals (actually a sea lion) and a lot of Black-backed Gulls (Kelp Gulls) and White-fronted Terns. The WFTE is as bright as a Forster’s and as elegant as a Roseate – what a nice tern. It simply glows with its bright primaries and thin jet-black bill. The Pintado Petrel (Cape Pigeon) below is not from this trip. 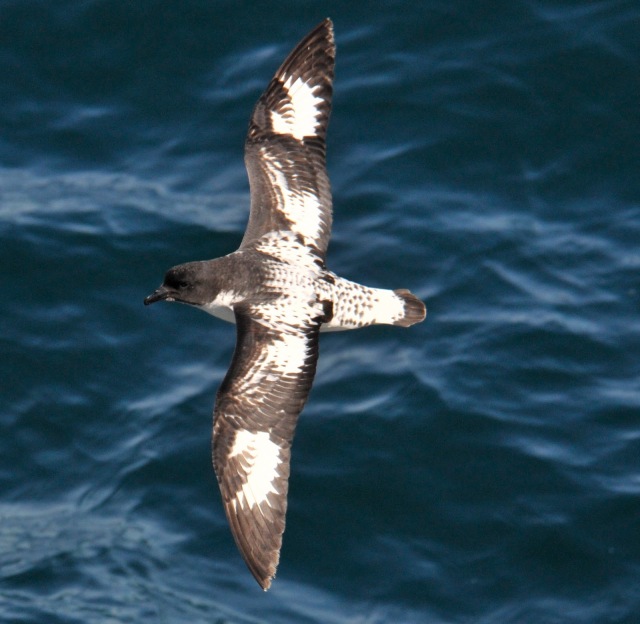 The Milford Track (or the Milford Trek) is a world-renowned hiking path. It takes three and a half days to walk this spectacular path. You have to be ferried by boat to the start and then picked up by another boat at the end. Thus, even though the track has thousands of people on it, you feel alone in a remote place. You are then bussed back to your starting point. But once you finish the walk you should jump on a cruise boat that travels the fiord. It is a grand spectacle; the cliffs rise from the ocean more than a mile straight up. The Nothofagus Beech trees cling to the stark rock walls and form a very unlikely forest. There are the occasional tree-slides that occur when thousands of trees break loose from the rock and slide down to disappear in the sea revealing the rock that they had clung to for many years.

The ride in to Milford Sound is a photographers dream. The hard part is balancing the dark green valleys with the snow-covered peaks; but there are hundreds of opportunities to try to get it right. There are lakes and pools all along the way. If it has been rainy there can be well over 1000 waterfalls. The Homer Tunnel is almost a mile long and descends 600 feet. It was dug by five men with mules and dynamite. There are the occasional Keas along the route as well. These large comical parrots are very much a pleasure and a nuisance. They can (and often do) remove the rubber gaskets from around your car door or windows and then pose in an electric-green plumage like the most elegant catwalk model. 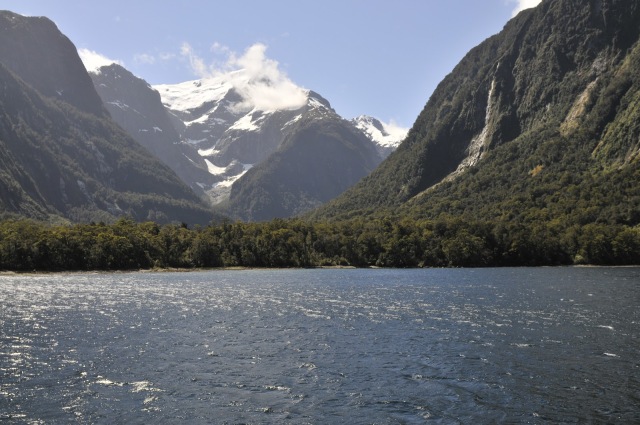 Once you descend into Milford Sound you don’t really find a town or even a village, it is more a ferry station and pier. It is from this pier that the cruise boats start of on their run out the south side and back the north side of the fiord (it is not a sound at all – sounds were eroded by rivers and fiords were carved by glaciers). The water is very deep; the boats can go right up to the rock wall with no fear of scraping bottom. There is usually more than 1000’ feet of water under the boat. This area is a World Heritage site and they have only modestly altered it in preparing it for public use. There is an airport for small planes and I was able to fly out in an 8-seat Islander. The flight was great and the vistas over the Southern Alps were staggering.

I haven’t said much about the hotels we stay in but I feel I have to now. The Pullman Reef in Cairns has the best towels in the world. It is a wonderful place to stay. The Crowne Plaza in Alice Springs is the best in town – nice enough for sure but not elegant; though the restaurants and lobby are very nice. The Sails in the Desert at Uluru is elegant. The Amora in Sydney is also very nice, though my room this trip was a bit worn.
Then we come to New Zealand where we start of in the Rydges in Christchurch and move on to The Hermitage at Mount Cook, and then on to the St. Mortitz in Queenstown. The Rydges is a fine small city hotel; but because most other places are quite grand, it may rank kind of low – but low amongst good hotels. The Hermitage is a government run hotel in a national park – a bit like an upscale dormitory; but the views of Mount Cook are brilliant. Then we have the St. Moritz in Queenstown; a lovely hillside hotel above Lake Wakatipu, a 52-mile long lake in the ranges of mountains that become the Southern Alps. The St. Moritz is in a class of its own – well, maybe the Pullman Reef and the (yet to come) Stamford in Auckland compare. Often the group will get suites; some with two bedrooms and a walk-in closet, two baths, and a kitchen and dining room. The views are over other buildings to the lake and mountains beyond. The walk back from town is definitely uphill, but worth it.