James Cook wasn’t a youngster when he entered the Royal Navy (British that is). Born in 1728, Cook was not from a seafaring family. He was an older teen when he started working (as an apprentice) for John Walker on barge-like boats ferrying coal between Newcastle and London. He studied and gained experience and in 1755 (27 years old) joined the Royal Navy. By 1757 he was a Master and looked on favorably by the two captains he had been assigned to.

He was in Canada as part of the blockade at the Foirtress Louisbourg (Cape Breton Island, Nova Scotia) that year. The fortress was surrendered by the French in mid 1758. For the next couple years his skill as a coastal surveyor was recognized and he was assigned to chart portions of the Canadian Maritime coast. He returned to London in October of 1762, married; and was then reassigned to do further charting of the Canadian coast. It was 1768 when he was nearly forty years old that he was chosen to be part of the series of worldwide expeditions to observe the Transit of Venus which was to take place on June 3, 1769. The Royal Society had expeditions all over the world to record, measure, and time this event. He left Plymouth England in August of 1768, as the captain (though still a Lieutenant) in a recently outfitted ship now called the Endeavor – taking five months to reach his assigned location in Tahiti.

There are dozens of books on Cook and his travels. Two of these are on the left below and the other two are simply great stories of exploration and science. The Day the World Discovered the Sun is the story of the Transit of Venus back in 1769. It was considered an eminently important occasion as it could lead to the reality of determining longitude – a surprising missing link in a sailor’s eighteenth century life.

Longitude is a title from the second set of images and is one of Dava Sobel’s great books. It is history and mystery, genius and backstabbing. A wonderful book that everyone should read. The Trial of the Cannibal Dog by Anne Salmond is a recap of Endeavor stories and incidents written by a very good New Zealand anthropologist, historian and author. The cannibal dog story sets the cultural scene for sailors of this era. 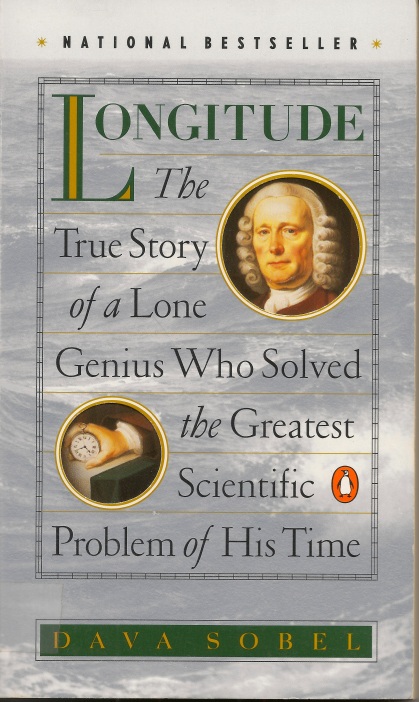 Lieutenant Cook and his new boat arrived in Tahiti where the sailors quickly made friends with the natives. The women were quite different from those of the harbor side streets of Hull, Plymouth, or London and the natives were enamored of the bright and shiny things the vessel brought into Camp Venus. The men chased the women and the natives pilfered European metal goods and other things at will. It was an active period as they readied for the Transit of Venus; even as the telescope pieces and parts were stolen and then returned the day observations were to be made. After the Transit, there were a few men who didn’t want to leave (no surprise) when the ship was ready to sail but they were found and brought on board. 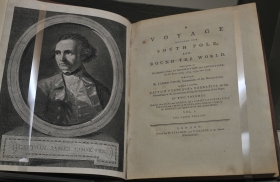 The adventure had brought them from Great Britain around Cape Horn to Tahiti. After Tahiti Jame Cook had a sealed envelope that when opened ordered the Endeavor to sail south looking for a land mass in that southern ocean. They sailed south toward the Antarctic (is was very cold in March) until they encountered sea ice and very cold temperatures, but no land mass. This voyage then headed home via the coast of New Holland (now Australia) where they were badly damaged by the hard corals of the Great Barrier Reef** and had to lay the Endeavor on the beach for seven weeks to repair the hull. They limped in Batavia (now Jakarta) for further repairs. In Batavia many of the crew (actually 84 of the 94) became ill with dysentery or malaria (Cook had established a diet that prevented scurvy from impacting the crew). They then proceeded around the Cape of Good Hope and northward along the African coast to Europe. Incidentally, the measurements taken regarding the Transit of Venus were not accurate enough to solve the longitude problem. Actually the great English science mind of Joseph Banks (eventually to be the leader of the Royal Society for decades and the young naturalist aboard the Endeavor) wrote more about his evening with native women than he wrote about the transit.

But the point of this blog page is to mention that the Endeavor was later used in the Falklands by the British and eventually carried British “redcoat soldiers” along the New England coast during the Revolutionary War. There were about 12 British ships tucked in Newport Harbor in Rhode Island in 1778 when a French force appeared. The British sunk their ships after removing everything from them, in an attempt to clog the entrance to the harbor which would keep the French at bay. The Endeavor has been on the bottom of Rhode Island’s Atlantic for the last 240 years or so. The Rhode Island Marine Archeology Project, after twenty-five years of looking think that they have located the remains of the long-lost Endeavor.

The house that Cook’s parents lived in after he started working on the collier in London is now a museum in Melbourne, Australia. The logs and maps that James Cook and Joseph Banks created are in vaults all over the world but the State Library of New South Wales in Sydney has a wonderful collection of both journals and charts. These are often on display in this grand library.

** The image at the head of this blog page is of Great Barrier Reef coral. The GBR is actually hundreds of separate small reefs and coral heads. Overall the reef is currently suffering from the deadly impact of warm water on coral. The light-colored corals in the image have been bleached as the warm water kills off the live outer skin of coral polyps. Rising sea levels and warming ocean waters, both from current global warming, may soon destroy coral reefs as we know them.

One thought on “Cook’s Boat and Australia”