The two islands (Pemba and Zanzibar or Unguja) that make up the semi-autonomous area called Zanzibar are just off shore from what was Tanganyika. Together they form Tanzania – a separate, and mostly unified, nation since April of 1964. The people of the islands are historically fishermen and spice merchants. In the late 1700s and early 1800s Zanzibar was the center of a booming slave trade. This trade was continued into the 1870s. The island currently uses bits of that history amongst its tourist offerings. The commercial interests of islanders included spices, often as valuable as gold.

There is a book titled Nathaniel’s Nutmeg which tells something about spices in the early 1600s and the book spends a good deal of time on nutmeg and warfare. The Dutch and British were in great dispute over the tiny island of Run; barely a speck in the Indonesian archipelago. This island was however the source to nutmeg and the spice traders saw the substance as more valuable than gold. A peck of nutmeg was worth more than a whaling ship full of barrels of fine whale oil. Spices were eventually brought to Zanzibar off the African coast and to Grenada in the Caribbean. 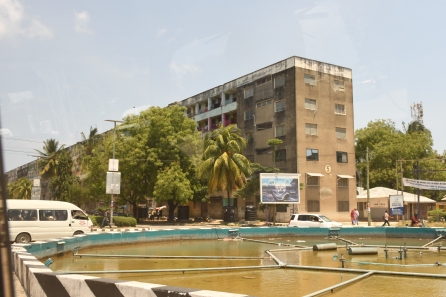 Arrival into Zanzibar is by boat or plane. The aerial view is not terribly appealing. It looks crowded and busy; the tin roofs shining in the perpetual sunshine. Once on the ground the “Stalin-type” design of many buildings (being replaced now) does little to lift ones spirits. The slave trade is remembered and the atrocities of this economy are memorialized in several places. The memorial to the slaves is quite touching; each person with differing facial structures and hair style/shape remarks on the great diversity of small nations that were abused during this time. It should be noted that there was no such thing as an African rather there were at least two hundred, and probably twice that, small nations each with their own land, culture and language.

The wildlife in Zanzibar is modest. There is a Red Colobus monkey and a smallish array of native birds. But it is not really a naturalists destination.