Most of New England is woodland. What farming there is, is done on a small-scale due to rocky soil, undulating terrain, residential growth, and that long-ago move by (profitable) agriculture to the central part on the US. The forests here have grown significantly in the past agriculture-free century and a half. There are lovely small farms and organic veggies available all over the region but there are no great swathes of corn or wheat or even potatoes now. However, we still do grow cranberries. The cranberry is a native plant that (like almost all other humanly consumed plants) has been modified (rapidly evolved) at the hand of man during the last couple centuries.

Cranberries require peaty, acidic soils and a lot of water. The bogs were originally created out old glacial kettles that had developed a peat bottom from undecayed sphagnum moss mostly. Nowadays the wetland protection laws pretty much forbid altering a wetland and thus most bogs are created from dry land. With land values increasing it is difficult to create a bog; thus we have seen the industry move to wetter and less costly locations. These new sites include the northern midwest and southern Canada. But here is what happens here in eastern Massachusetts in mid-October.

Bogs can be quite dry as long as the spoils and water are right. Thus a small dry-bog can be managed and dry-picked. The larger bogs are in lower areas with water available to flood them. Flooding protects the plants in the winter and floats the fruit during harvest. The lawn-mower like thing in the left-hand image is a “modernish” dry picker. It rakes the berries off the stems and then carries them up and into a bag or basket. It replaced hand rakes used in the 1800s.

The image below is a wet bog picker in action. This smallish device has a wheel of widely spaced rods in front, mostly under water. This wheel spins and knocks the berries off the vines and creates that line of white-water swash. As mentioned – the berries float. Care must be taken not to drive into the ditches that surround a bog, but generally speaking this is like cutting a lawn – albeit under water.

The berries float and it is much easier to corral them with floating booms in the shallow water than to pick them up by hand or machine. Once the are corralled along the shore a suction hose lifts them into a waiting truck and they are then hauled off to Decas of Ocean Spray for further processing. 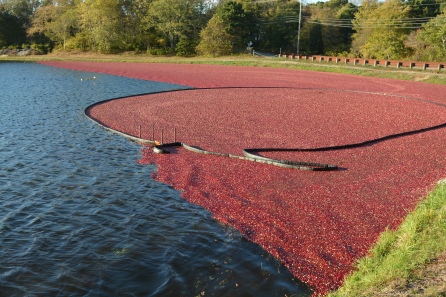 They are available at a few location as dry-picked fruits for making jelly, sauces, breads, or tangy additions to poultry meals. Most are made into juices and jelly by the larger firms. Northland and Ocean Spray are probably the largest.