Please consider all images as copyrighted and ask permission if you want to use them in some way. Thank you, DEClapp.

I should first say that Homer is a very crisp town at the end of the Kenai Peninsula about 225 miles from Anchorage and up against the waters of the Cook Inlet. The Seward Highway out of Anchorage (a real city) down to the Sterling Highway and then 142 miles on to Homer is all it takes to reach this little bit of paradise. Homer really is a very nice place. It has residential and wilderness living, with spectacular views, and great fishing, birds, mammals, and waterways and hosts a much more moderate climate than does most of Alaska. The road, Route 1 or the Sterling Highway, hugs the coast and rivals any highway anywhere for scenic vistas (the blog post on eagles was all shot along this road near the town of Anchor Point). This area is very accessible from the Anchorage airport and offers most everything that Alaska is known for. Over the past several decades the Homer Spit has served fisherman, college kids looking for summer work, birders, and now tourists.

The Spit is about four-and-a-half miles long reaching out to separate Kachemak Bay from Cook Inlet. Forty years ago I was here and there were fish processing plants, a strong fishing fleet, and summer jobs for kids who would camp on the beach and save money (and have fun) during the summer. The Spit is now mostly art galleries, restaurants, and fishing charters galore. There are still lots of boats but way more recreational craft than ever before. There are walkways and boardwalks to get you near the boats.

Anyway, what I am finally getting to is that we took a several-hour boat ride out from Homer to see what we could see. Fran and I were hoping for birds; but whales, eagles, sea otters, and fish were all options we wouldn’t have passed on and we saw all of them. We had called Karl Stolzfus, a native-born Alaskan, who operates the Bay Excursions boat called Torega. We had signed up for the boat trip before we arrived in AK but it turned out the boat wasn’t full and we had good company and plenty of room. We also had a chance to choose where and what we might look for. Karl has run this route for years and knows where each species is likely and where the least common are nesting. He was very informative and a very capable captain.

The terns above are Aleutian Terns though they were not known to nest in the Aleutians prior to the early 1960s. The introduction of foxes was probably what killed them off (by the thousands) in the previous two centuries. They arrive back in Alaska to breed but their wintering grounds are still unknown; the Pacific is huge.

Sea Otters (and Murrelets) deserve a page of their own and some day will get it, but here are a few fun facts about Sea Otters. They have the thickest mammals fur known, with 850,000 to one million hairs per square inch. (In my prime I probably never had the human average of 2,200 hairs per square inch and now, whew way fewer.)  The skin of the Sea Otter never gets wet as the longer guard hairs shelter the air-holding undercoat. Thus they are warm, dry, and bouyant. Youngsters are so bouyant they cannot get below the surface and are left floating like bobbers often wrapped in kelp fronds. Females weigh about fifty pounds and males about 80, though the heaviest male can reach 100 pounds. The water here in Alaska is quite cold, so the mammals need to burn lots of food to create the warmth needed to survive even with the dense fur coat they wear; they eat 25% of their body weight each day – or even a bit more. They eat some fish but lots of urchins, crabs, and shell fish. 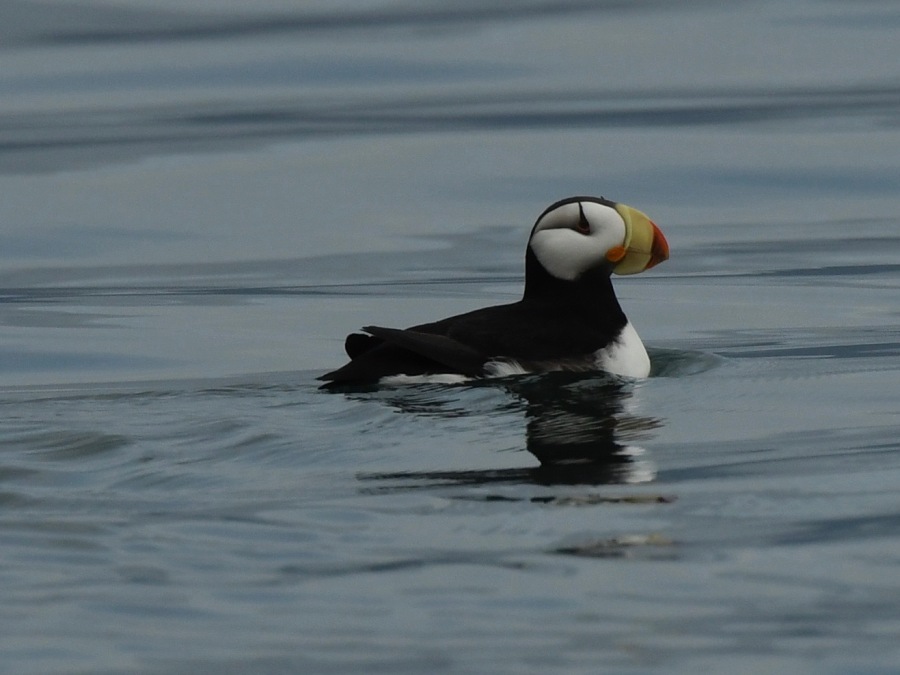 2 thoughts on “Alaska; a boat ride out of Homer”