We have long been home from our trip to Australia but I had one of the “fevers” that seem to be a feature of the island continent, at least there are lots of scary illnesses to read about. My illness was characterized by a modest fever, an encephalitis (a symptom, not a disease), and a prolonged desire to just stay in bed. As with all viruses sooner or later you die or get better and fortunately it was the latter for me.


So I will now start on the blog pages that, I hope, will give a sense of this gorgeous place. Over several blog pages I will show where we went (and what we saw) as we traveled. We landed in Melbourne after a lifetime on an aircraft (but not as bad as the return trip) and took the SkyBus from the airport into the city. We were headed for a town on the southern edge of the city (Port Melbourne) and decided to get our one look at big buildings as we headed in from the airport. From the CBD (central business district, a phrase used in most towns) we caught a taxi to our home for the next three nights and made arrangements with the driver to return to deliver us back to the airport for our flight to Tasmania.  But in the meantime we had the Melbourne area to look over.


As our hosts had left us a key we entered the beachside house, found our room, left our gear, washed our faces, grabbed our binoculars and went for a walk. We walked along the beach and then cut up a walking path (paved and signed) along some ponds and shrubby growth. We had twenty or so species of birds, no mammals, and a chance to get some fresh air. Our host returned from work at about 2:00pm and we headed out for an afternoon of local birding. Australia is developed in a nice way; there are residential blocks, cities, and a lot of parkland and countryside. We went into the countryside and had a great time, got the lay of the land, and forty-seven species of Australian birds.


We used our heads and did not join our hosts for an evening out and as a matter of fact did the same the next night. We were very tired and out of sync with the moon, stars, and daylight. So we went to bed early and spent the whole of the next day out birding. We started with a few local stops and then went to the You Yangs and from there to the Werribee Treatment Plant. Though there is a great deal to say and write about I will try to insert images from here on and use the captions as dumping grounds for ideas and memories. 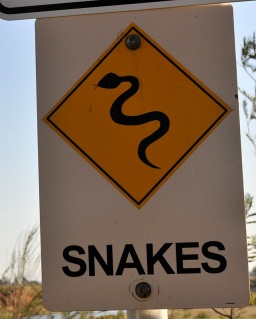 One of the first things our host (a doctor and dedicated birder) asked Fran as we were driving along was, “what first strikes you as different from the US?” Fran commented on the architecture, but certainly the road signs and cautions were different from anything we are used to. Once in New Mexico a parking lot had a sign that advised you to watch for rattlesnakes but the snake-sign was rather surprising. No one asked me, but the first thing I noticed about residential Australia was that each and every corner or intersection was not adorned with one or more gas stations and quick food places like we find here.

A regional park called the You Yangs is land on a series of granite hills rising from a basalt plain. The rock, gravel, and plants have been harvested for more than a century. The current park is being replanted with native vegetation. There are more than 40 kilometers of mountain bike trails (and more for horse-riding) here as well as picnic areas, walking trails, and more than 200 species of birds. The Spotted Pardalote shown below is a You Yangs bird. We walked a little here but had almost all the target birds near the gate. There was one bicyclist and one dog-walker in the area while we were there. It was our first exposure to the woodland plants of the area. We were to become very familiar with eucalypts. 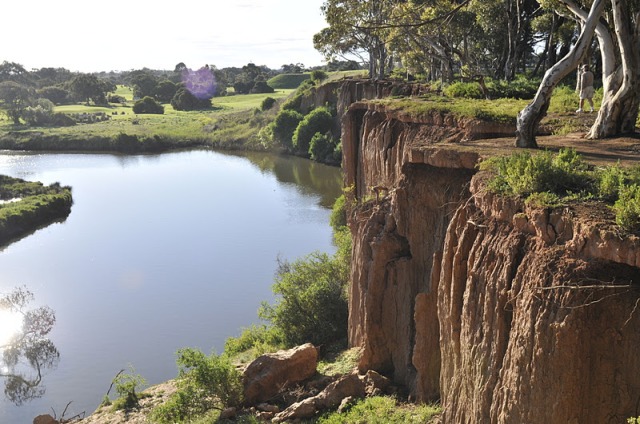 This views shown above and below are along the Werribee River and shows the sedimentary substrate found in much of the area. The granite of the You Yangs stands out from the rest of the region. The eucalypts growing in this area had been harvested and the terrain turned into agricultural lands. As the lower levels floods annually it was largely pasture (paddock) land for livestock.

Our stay in the Melbourne area turned out to be way too short. There are coastal area and beaches, islands, penguins and platypuses, and a variety eucalypt forests to look at – and we tried, but left a lot undone. Below is a brief selection of the bird life. Once we arrived back in the States people asked about our hosts, Melbourne, the food, and so on and we realized that we mostly take pictures of birds, not cultural trappings or people. So here are a few of the birds. There will be another six or more Australia blogs so the cultural stuff will seep in…… 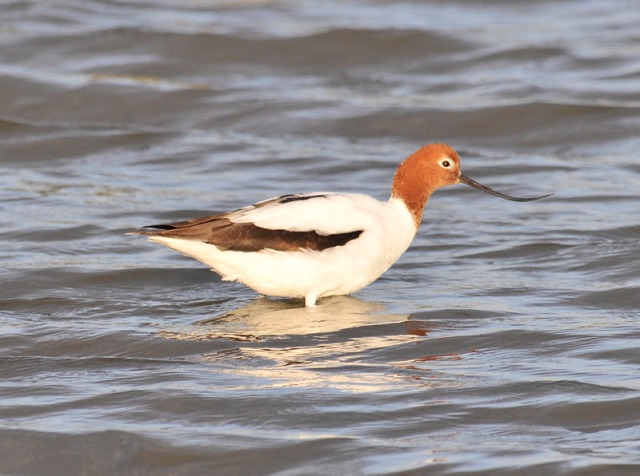 The shorebirds were quite different here; this Red-necked Avocet is very similar in size and shape to ours yet strikingly different. The same can be said for the Australian stilt; Black-winged and Banded. The migrants from Asia that reach Australia do not always descend to Victoria and Tasmania. But we did see lots of Sharp-tailed Sandpipers and Greenshanks. The majority of Australian birds do not migrate from Australia thus there are many shorebirds that are found year-round. The eye-catching Red-kneed Dotterel, shown below, is one of those year-round birds. 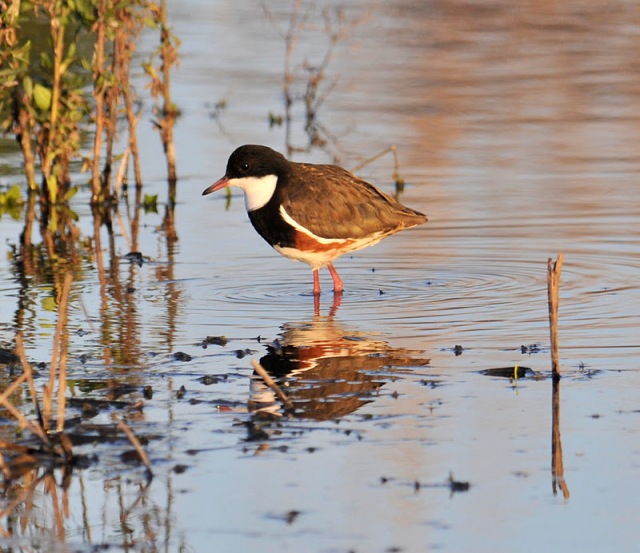 Perhaps the most exciting group of birds and the most difficult to deal with, is the Honeyeater complex. There are Honeyeaters, Wattlebirds, Miners, Friarbirds, Chats, and Spinebills in this large group of (at least) seventy-four species. Had Darwin seen these birds the Mockingbirds and Finches of the Galapagos would be merely an afterthought. These birds are often similar in appearance but restricted to specific geography or vegetation. They are adaptation in motion – and most of them are pretty common (if you go to the right place). The New Holland Honeyeater is depicted below and is a widespread and common bird along the east and southern coasts. But evolution persists even within a group that has been isolated for 70 million years – there are six separable races or geographically restricted populations. The second bird down is a White-plumed Honeyeater, a widespread and common bird in most of Australia. 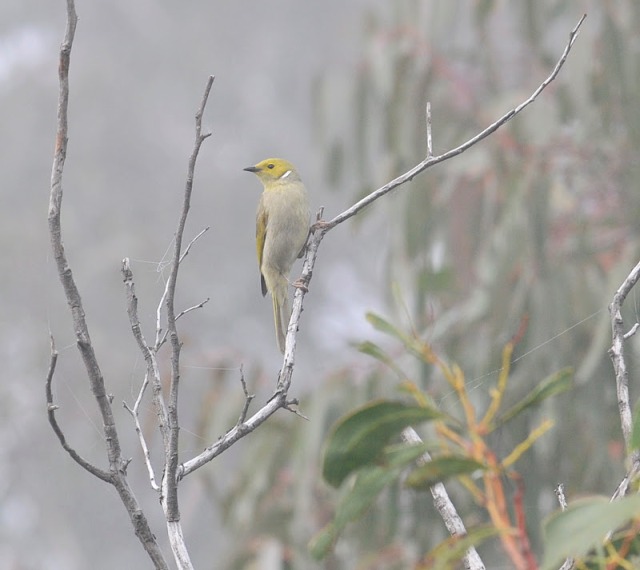 Fran’s first Laughing Kookaburra was in the fog and mist that shrouded the You Yangs when we arrived. The fog soon lifted and a better view of this very large kingfisher was had by all. They are common along the eastern side of the continent and are as raucous and visible as you read about. An Australian icon, but still a goofy sort of bird of the forests and woodlands.

The bird below is tiny. It is one of three pardalotes found in Australia; two are common and one is very rare. They build a domed nest in holes in trees or in tunnels in the ground. This Spotted Pardalote is bringing dry grasses to its tunnel. The Spotted Pardalote is common along the eastern and southern part of the continent and Striated Pardalotes are found pretty much everywhere. There are many populations of each type.

The next blog will introduce the island state of Tasmania. The future blogs will describe the continent and then we will travel through Victoria and southern New South Wales.
There is a lot more to show and tell.