This was to the first blog – but I finished the oceanic-bird page first – so this is second.

Over the next ten days I will be posting blogs from several islands in the Galapagos chain. This posting will set the geologic tone for the rest of the posts. The Galapagos are not lush and green like most equatorial sites. They are often bare and rocky, sparsely vegetated, and surfaced by what look like fresh lava flows. The plants and animals of the Galapagos are actually quite limited in diversity and many of the organisms have adapted to the archipelago or to an individual island.

Though the Galapagos and Darwin are knitted together in today’s thinking, there are many other factors that stimulated Darwin regarding the development of species and many other places that had a more significant impact than did these remote islands. He had already seen fossils that looked like creatures he was familiar with and experienced and earthquake that lifted the city of Concepcion, Chile about nine feet. These observations had opened his mind to the possibility that the earth was changeable and had changed in the past. However the continued work of David Lack and Peter & Rosemary Grant and their studies of the wonderful biologic array presented by the finches of the Galapagos have elevated the islands to an iconic evolutionary position.

This spire is a remnant of a tuff cone that once formed the circular rim of a mostly eroded crater.

If Darwin had realized what the Galapagos really had to offer he most likely would have focused on the variation between similar animals that obviously share ancestry. There are land snails that speak better to the development of species than do the finches. The mockingbirds do the same; as do lava lizards and many other creatures. He was aware of, but did not study, the shell-shape differences that can be seen in tortoises from different islands. As a matter of fact the Beagle took about 50 tortoises on board for food and ate them all as they traveled and Darwin did not save a single shell. He thought (regretfully) about the finches and tortoises on many occasions after returning to England.

Geologically the islands are a continuing cycle of creation and destruction. The lava builds upward and eventually rises above the surface of the Pacific from a hot-spot deep in the earth. The tectonic plate moves to the east a few inches a year, slowly-but-surely leaving the hot-spot behind. Over time the islands cease building and the ocean begins to erode the islands until they disappear below the sea. The oldest island that we see here is about four million years old and the youngest about 700,000 years.

However, the islands have been building and eroding here for about seventy million years; hence there are dozens of old islands beneath the sea to the east of the existing archipelago. The young islands are often barren lava-covered specks in the sea. However, if the islands build high enough they can collect clouds and soon become moist. The plants move in faster in the higher moister areas and soon pockets of soil develop and these larger islands become vegetated. Those islands in rain-shadows or without elevation usually remain dry and rocky – sometimes for tens of thousands of years. 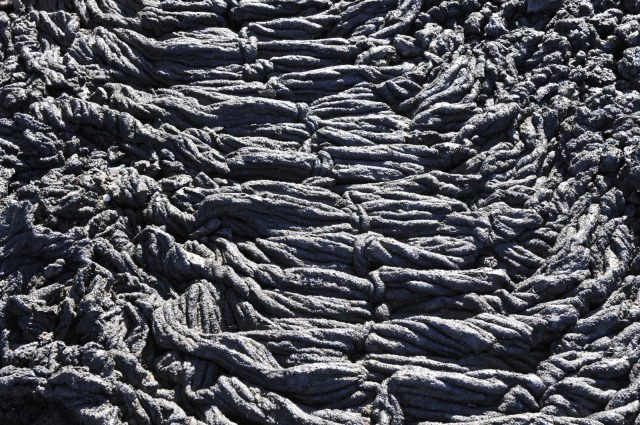 Pahoehoe forms when a rather liquid lava flows and the surface cools and skins over. Think of pouring hot, liquid candle wax down a sloped board and ponder how it would look as the flow cooled. Then imagine what would happen if more lava came, or less, and so on. 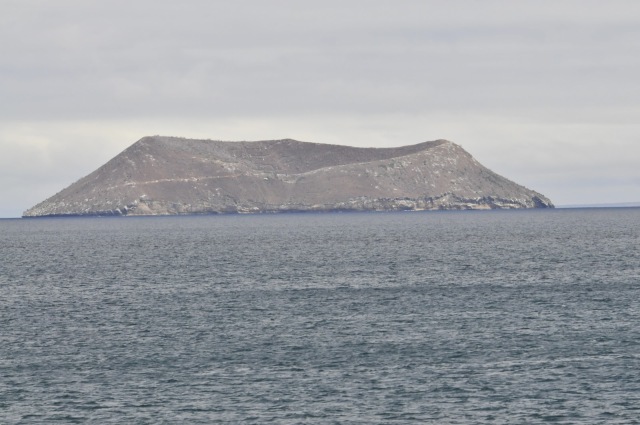 Evidence of volcanic (and plate) action are everywhere in the world in some form or another. The Galapagos offer a chance to wander through a living textbook on volcanism. This is an image of Daphne Island.

The earth’s crust as we see it is a series of floating plates that are buoyed up by the hot magma of the inner earth. These plates often move; creating trenches, undersea volcanic troughs, and mountain ranges where they collide with another plates (like the Andes to the east of the Galapagos). The older islands have eroded and traveled with the plate eastward. Volcanic activity still occurs in the islands; in the region of a “hot spot”. This spot is a plume of magma that extends upward from the earth with such heat that it continually melts through the plate at the same spot. The plate moves and the islands form in a row like the (inverse) of dripping pancake batter from a spoon on the way to the griddle.

There are layers of ash, tuff, and lava all over the Galapagos. They are young and the geology is like an open book. There are places where lava flowed over land and where it exploded from under the sea. Scoria, lava tubes, tuff, calderas, cinder cones, pit craters and aa and pahoehoe flows, are all there to be seen and understood. It is a remarkable place for its geology as much as for its animal forms.

There are many many small islets and only a few more than a dozen larger islands out here. The Galapagos are 600 miles west of the Ecuadorian coast; they are remote, stark, beautiful, stark, barren, lush, and haunting; they remain in your mind well after you depart their rugged shores.