Birds of the Galapagos Islands – Part 1

I will do a few blogs on the birds of the islands. They are certainly the most abundant and most famous of the vertebrate animals on this remote archipelago. In case you favor the huge land tortoises as the most famous of the Galapagos vertebrates I will do a page or two on them as well. Over the next week I will do several pages on both the islands and the animals of the Galapagos.

The birds of the islands have earned a reputation as the stimulus for Charles Darwin’s thinking regarding the origin of species. In fact he was more impacted by the geology of the South American coast that he had seen in the almost four years of travel before reaching the Galapagos. Darwin developed a sense that the earth was changing over time well before he began to think about plants and animals changing over time. Once Darwin returned to England he wrote (more than 16 books!) about the journey, geology, island formation, barnacles, and the raising of domestic animals before he wrote about the origin of species. He had a lot of thinking to do.

The finches found on the Galapagos Islands do show close a group relationship and are in fact now used by evolutionary biologists as exemplars of adaptation and speciation. But, most of that work has been done by David Lack and Rosemary and Peter Grant in more recent times. If Darwin had had more time in the Galapagos he might have noticed the variation in the mockingbird or land snails of the Galapagos; they, like the finches, show  a common heritage and local adaptation. As it was he did not label the finches he did collect very well at all and had to borrow two other collections to look at once it was pointed out to him that the birds were in fact all finches not an array of warblers, finches, and others as Darwin first assumed. 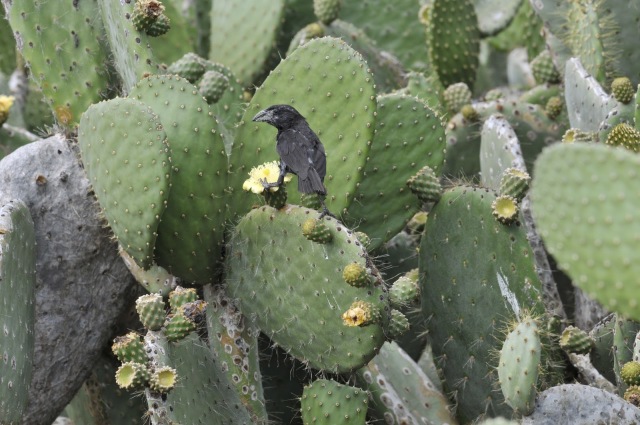 The cactus finch pollinates it food plant (the Opuntia cactus) and has developed a
long and pointed bill to reach deep into the cactus flowers.

The birds of the islands are rather few in number and most of them are comfortable at sea or along the coast. There are pelicans, gulls, storm-petrels, terns, frigatebirds, petrels, a cormorant and a penguin, and one albatross. The land birds have had to adapt to a rather barren, lava-dominated landscape or perish. It is most likely that most birds lucky enough to survive a wayward flight to the Galapagos did in fact die. The survivors were seed eaters and have now radiated into species that fit into a variety of habitat types.

On this page I will mention some of the birds of the coast. The pelagic (oceanic) terns (Sooty and Noddy) that breed in the islands are birds of all the worlds oceans. There are colonies off the Florida Keys and on the Great Barrier Reef in Australia. They nest on the northern islands and are rarely seen south of these waters. They stay at sea except for the breeding season. In my four visits to the Galapagos I have seen no Sooty  Terns and the only Noddies have been loafing birds on the rocky edges. 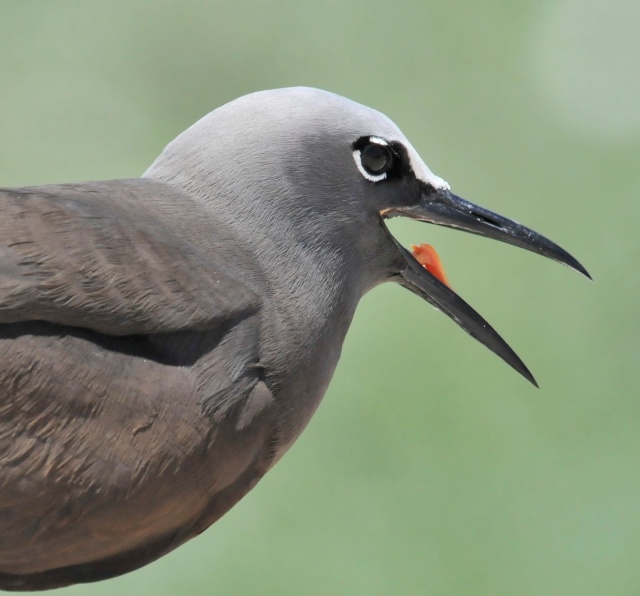 Common (or Brown) Noddys are pretty much all brown but the soft gray head looks
white in bright light. Like the Sooty Tern they nest in colonies with thousands of pairs. 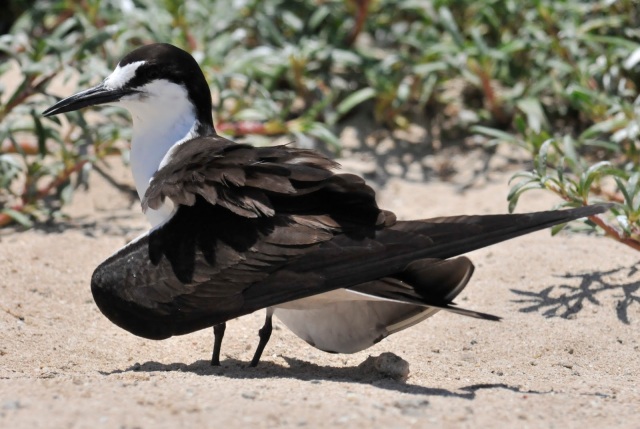 Tropical nesters, like this Sooty Tern spend a lot of time, in the sun. They air themselves by drooping their wings and often shade their eggs and young. The less common Bridled Tern can be found in these colonies on occasion. 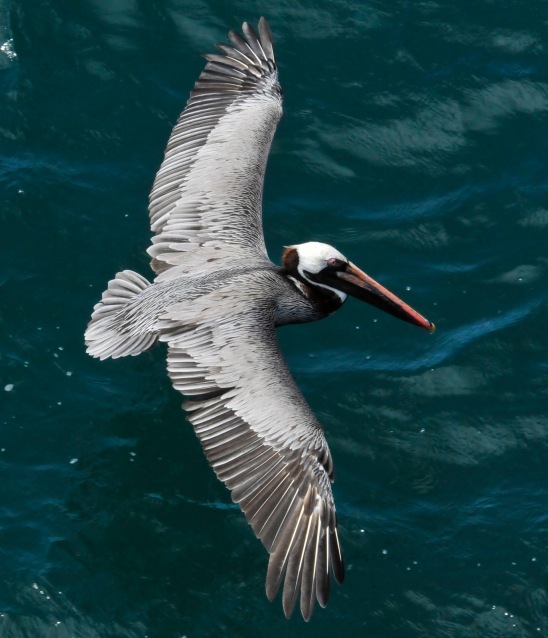 The Brown Pelican of the Galapagos is another bird of the ocean though it uses the shallow waters. The pelican is a subspecies tied to the islands but it has not changed enough from its South American relatives to be considered a species.
Perhaps the most famous of the islands’ salt water birds are the boobies and the Waved Albatross. There is only the one albatross here, called the Waved, and three common, nesting boobies; the Nazca, Red-footed, and the Blue-footed. Most albatross’ travel long distance over huge expanses of ocean looking for sparse foods to bring back to their nest. The Waved Albatross is a bit luckier in that they can stay rather tight to the islands and do very well. After nesting they seem to head into the ocean to the north and east of the Galapagos.
The Nazca Booby has only recently been recognized as a separate species. It’s ties to the islands and the changes in size and pattern have established it as a distinct species. The three boobies in the Galapagos feed in different part of the ocean: the Blue-footed feeds inshore near the volcanic cliffs, the Nazca feeds a bit further out but no very far from land, and the Red-footed Booby feeds well off shore. This is reflected in the number of eggs laid; only one in the Red-footed, often two in the Nazca but only one survives, and usually two in the Blue-footed. 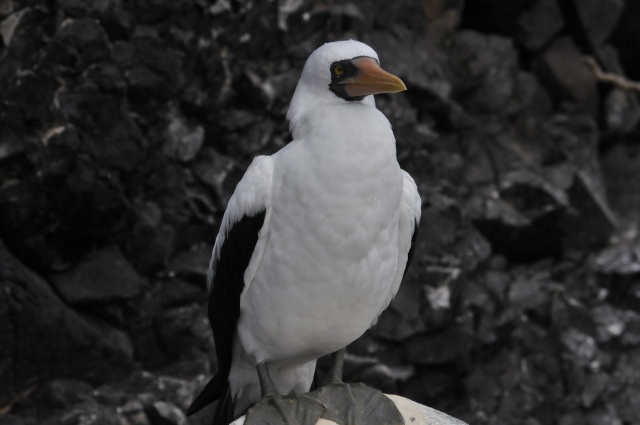 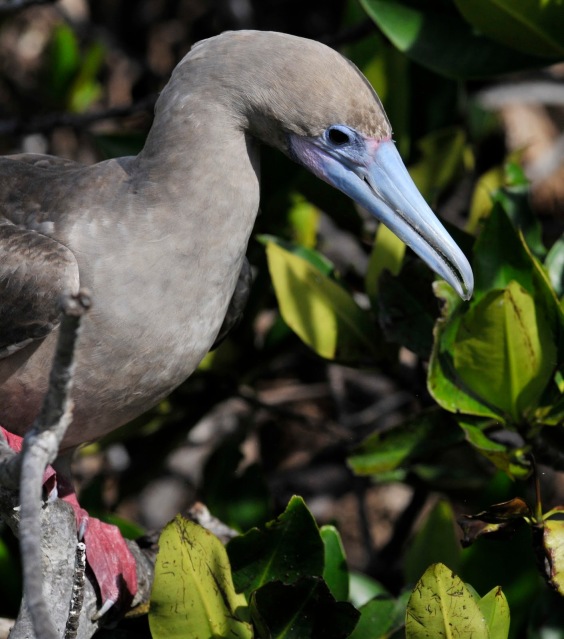 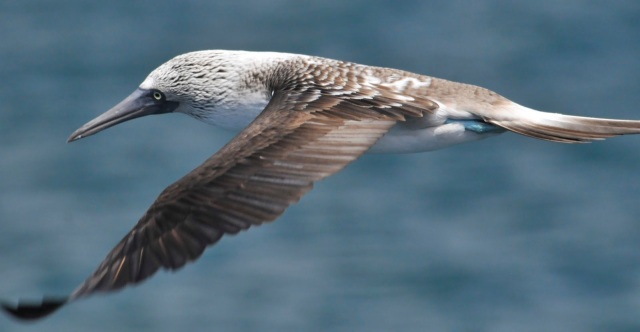 The Red-footed Booby comes in both a white morph and a brown morph and both forms can be seen in the Galapagos Islands. The brown morph is above and the white is below. This species is found in the southern Atlantic off Brazil as well as in the Pacific. The white morph of the Red-footed Booby looks a bit like the Nazca Booby, but it has a bluish bill, reddish feet, and (best of all) is usually perched in a bush or on a tree. The Nazca booby is always on rocks or sand. In the air the red-footed has a longer and more attenuated tail. 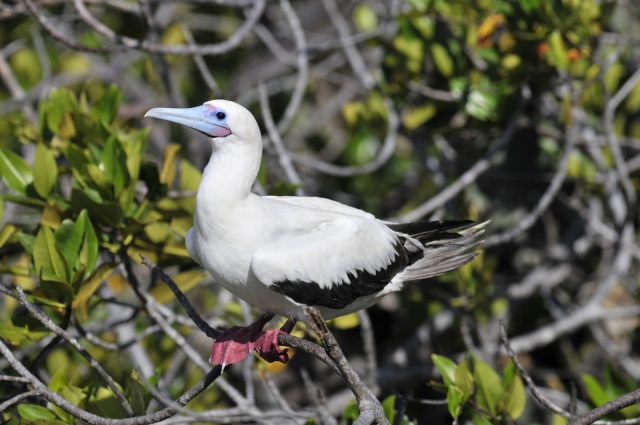