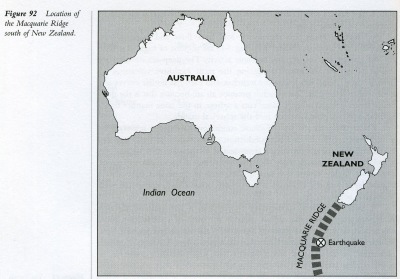 New Zealand is a collection of islands – two of them large, one smallish and then there a lot of really small ones. For about 83,000,000 years this land mass drifted alone in the south Pacific, the very south Pacific. The land mass that is now New Zealand is part of a larger mass most of which is currently submerged. Over the past millions of years this region has been exposed and inundated at various times. There is an active fault line that runs sw/ne through the western edge of South Island and North Island has many areas of geysers and mud pots. This region is still tectonically very active, although most of the activity right now seems to be between plates and not volcanism. The land itself is a mix of volcanic materials and sea floor materials. There are limestone caves on North Island where old sea floor has been eroded by oozing and dripping water.

It seems that Australia was settled by people originating in Sri Lanka some 40,000 years ago. These people never reached New Zealand. It is quite possible that the Australian aboriginals came by boat but in short hops during a time when the ice caps held enough water to lower sea level over 400′. New Zealand was also settled by people via aquatic channels, but it is likely these people came to New Zealand by traveling south from an enclave in the central Pacific – perhaps in the area of the Society Islands.
Depending on how you define your terms; the Maori are the indigenous people of New Zealand. They are people from the western Polynesian Islands who traveled and settled throughout the Pacific during the past 5000 years (plus or minus). Their DNA ties the people of the Pacific to the Chinese coast from which they headed south and east into the sea, about 5000 years ago. They seem to have centered in the island chains in and about Tahiti no more than 2200 years ago. The people seemed to settle and establish and remain sedentary for many generations. Then something would stimulate a movement of people and the settling of a new area. The lack of written language makes much of the cause of this pulsing distributional pattern hard to discern, but the effect is quite visible.
The languages of the Maori and the Hawaiians are very similar and the speakers of each tongue can understand each other to this day. The other Polynesian and Pacific languages have similarities as well. It seems obvious on many levels that the people who traveled the Pacific Ocean and settled it, were from the same source stock.

These were tropical people coming to a rather temperate area. There is snow on the mountains here and very seasonal weather patterns. The polynesians who arrived here were not yet Maoris and they were not yet ready for the change in the weather. But they adapted. They found New Zealand flax and made wraps, and coats, and ropes from the fibers. They carved the trees into great double-hulled catamarans and they ate the flightless birds that were endemic to the islands. They were the first mammals to tread the land in 83,000,000 years. It was easy pickings and they settled in. Eventually they developed a culture and the trappings of sedentary life; they became the Maori.
The arrival of the Maori in New Zealand is given as one of two disparate dates; either about 800AD or 1300AD. In all cases the evidence seems to have these people living somewhere in the center of the Pacific, perhaps in the Society islands, before moving south to New Zealand. They arrived in the central Pacific a couple centuries BC and after many generations and several hundred years of residence, in part moved on to a new location. They are also known to have traveled east to the Easter Islands off the coast of Chile as recently as 800 years ago. The Humboldt Current moves north along the western edge of South America and is a real barrier to travel; but perhaps they even reach South America and the Galapagos Islands.
When Captain Cook arrived he was amazed at the speed and maneuverability of the Maori boats and the seamanship of the crews. They could run with the wind and easily tack back through the wind. Cook was very impressed. The Maori were warriors, both men and women were aggressive. The tattoos on their bodies depicted their lineage as did the carvings on their buildings.
Modern Maoris are part of mainstream New Zealand. They have their own language still and are working to use it as much as possible. Many, perhaps most, of the place names and names of plants and animals use Maori as the describing language. They have levied land claims against European New Zealand and in many cases have had land returned to them. There are many reconstructions and cultural centers on the North Island. In most cases the life of the Maori that is depicted at these facilities represents a time of plenty for the original people. The hunting skills, cultural adaptations, and craftsmanship of the people are shown. A meal is provided nightly (hangi) for those who stay (and pay). The cultural depictions are not demeaning or presented as if from a lesser culture; rather they are educational and prideful. The early days were a time of success for the Maori people and it is represented that way by the descendants who have adapted to new cultural demands.