The caves on the North Island are quite famous; great limestone excavations made over time by the one of the most passive and vigorous agents on the planet – water. The caves are in an area of rolling mountains, well eroded from their original height. The limestone is from ages ago when these hillsides were part of a sea floor and accumulating bits of lime from all kinds of oceanic life. Now they are part of the landscape; above sea level, covered with leafy vegetation, and their insides are continually being eroded by seeping, flowing, and dripping water.

The caves most usually visited are the Waitomo Caves – but Jack Clyne, the Tour Director in New Zealand, has found an exquisite cave system just a bit further up the road. These caves are the Ruakuri Caves and are wonderful to visit. They are less frequented and hence you have the feeling of being deep in a remote cave – more so than being deep in a remote cave with lots of other people. 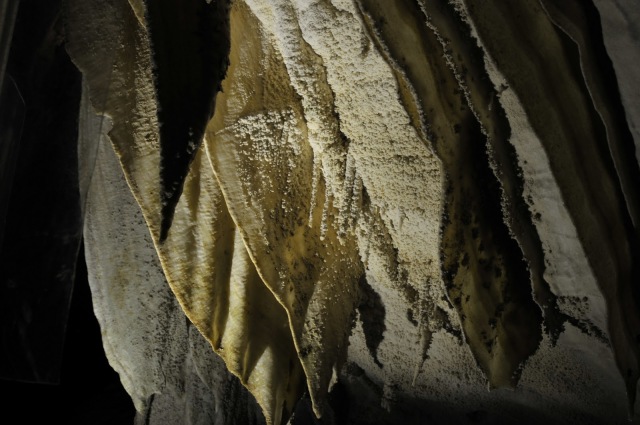 The pathway through the cave system is a marvel. There are no big signs, no parking lots, and little alteration to the terrain – there is a packed gravel drive, that’s all. You enter from ground level through a man-made (gunnite perhaps) rock formation. There are Welcome Swallows nesting as if it were a real rock outcrop. This entry brings you through an air-lock door into a very large space – or at least the echos in the dark make you think that. You then watch as the lights go on; downward and downward, gently illuminating a great silo with a ramp around the outside wall. This great spiral ramp – as if you were descending along the outer edge while inside a great cylinder – allows your entry to be gradual and very personal. You know that you are descending into a cave. It is enchanting.
There are probably five full circles to reach the bottom about 50 feet down. From there you walk through another man-made passage and through another air-lock as you enter the main cave system. In actuality you have dropped down and then moved laterally as you entered the cave; now well below ground. From there on you are almost always on a stainless steel boardwalk with a concrete surface, suspended by spelunking and mountaineering devices from the cave itself. There has been very minimal impact from this installation and little change to the floor of the cave.

We were in the cave for almost two hours. As we passed into and out of sections the low-heat lighting would come on as we entered a new section and then go off as we departed. The temperature was cool and the air moist but comfortable overall. We had one person in a wheelchair and the pathways were more than adequate. (Coming up the spiral ramp in the “silo” to exit the system was a bit of a push – but it was smooth and gradual.)
There were stalactites and stalagmites as well as curtains and dollops and streams. A river roared through beneath us at one point. There are some tours that float through the cave and/or visit the cave by boat. I have not done those options but I really enjoy visiting as we did and appreciate the slower pace and the chances to observe and ask questions without excessive noise and motion. We were guided by one of the founders of this set-up.
One of the highlights of the cave tour is a look at an insect that resides in the cave and depends on the very occasional drift of other insects for food. Not only do other (very small) insects have to pass through the cave in order to be eaten, they have to captured by tendrils of mucus that the insect larvae hangs down from the small web were it resides. These, luck-dependent creatures, are glow-worms. The gentle glow for which they are named attracts the drifting insects toward the light and the gooey strands.
Their eggs are laid in the cave, the first hatched eat the other eggs, they build a small web/hammock of silk, and then drop down mucus strands. They then wait and wait. If the strands catch food they devour it and eventually lay eggs. In the pitch black of the cave the eery light from the glow-worms allows your mind to wander from the confines of a cave to the vastness of space. It is all part of a remarkable creature’s life-style and dwelling place.
Many animals (and some fungi), mostly insects, have bioluminescence. There are many beetle larvae that produce light and glow and many adult beetles as well. (The group Lampyridae which contains the firefly is the best known.) The New Zealand cave creatures are members of the Diptera family and belong (I think) to a group called fungus gnats. They are Arachnocampa luminous, or “luminescent spider-like campers”. These New Zealand cave creatures can turn on and off the glowing parts.
In addition to uplifted mountains, volcanoes, and limestone caves the North Island has hot springs and geysers. In Rotorua, where we spend some time with the Maori people, the surface geology is very obvious and a bit nerve-wracking. In the town many of the residential yards are vented with 2″ pipes to release steam from just underground. There are occasional houses that are abandoned because hot pools have formed in the yard, and the smell of sulfur gas is obvious. There are places where your feet get hot and where boiling water is inches from the surface – or even at the surface if you dig a few inches down. There are places where you are advised not to walk.

The geyser at the Maori education center we visit seemed to be active all the time, though it is said to be active “at least every two hours and perhaps almost hourly”. It was spewing and gushing the whole time we were there. The ground is warm and the air is warm and moist.

Along the slopes of the geyser area there are bacteria and algal mats that provide color to this stark area. I imagine that many of the mats are actually in the group of life forms called Archaea and are neither bacteria or algae – but I saw nothing written and heard of no studies.
There are geysers, mud pools, hot springs and all sorts of similar configurations. The whole area of Rotorua is in an ancient caldera, now partially filled with a deep lake that has a volcanic plug in its center. The lake itself has sections that receive hot water and areas that are less impacted by the heat. The places where the sulfur-water enters are grayish in color and can be easily noted by the continual rise of steam. The island plug is now a rat-free (invasive animal-free) area where some of the rare birds that were impacted by alien species are now able to survive. These restoration projects are rather widespread in New Zealand and almost always on islands. (Google Tiritiri Matangi for a good example.)
About a century ago there was an effort to build a spa that would attract people for the healthful benefits of mud, heat, and immersion. The building is now a museum – it seems that a spa in New Zealand, though used somewhat, was to expensive to maintain and too far off the beaten path. The building of the spa was a long, slow, and very expensive project – another reason the idea never bore the anticipated fruit.