This morning we started out at the Coachella Valley Preserve, an area bought (in 1984) to protect the Coachella Valley Fringe-toed Lizard. It also protects a beautiful swath of California Fan Palms that grow along a one-mile stretch of wet soil. There are eleven palm oases along a crack in the earth (part of the San Andreas Fault) that dams the flow of groundwater and brings some of it to the surface. In many impoundments in the desert algae, dust, and invasive vegetation mar a pond or puddle, but here the water is clear and crisp. The Desert Pupfish is an endangered species and is found in these pools.

The palms are the easiest things to ogle and appreciate as the lizard is reclusive and the Desert Pupfish is also hard to see. The palms are 40-50′ tall and wear their old leaves like a heavy fur coat. They are called California Fan Palm and are the only palm native to this region. Many of the palms planted as street trees that look like the CFPalm are really a Mexican palm of the same Genus and have almost the same appearance. When they are planted as street or yard trees they are sheared to expose a trunk with a cluster of leaves at the top. In the wild they are quite different. Some of the oases are so densely vegetated that they have a canopy and block out most of the sunlight. The leaves are palm-like and remind me of palmetto leaves from Florida and other southern parts of the world.

While we were here we also had a few good birds; Phainopepla, Loggerhead Shrike, White-throated Swift, and Orange-crowned Warbler were nice until the arrival of a Yellow Warbler and three Lawrence’s Goldfinches. The warbler is not rare anywhere and is found throughout the US and Central America – but we hadn’t seen one yet and they are generally out of here and on their wintering grounds by now. Lawrence’s Goldfinch is a special bird. It is very local in distribution and also happens to be beautiful. They are erratic in their movements and cannot be counted on anywhere, even during nesting season.

The history of the Coachella valley Preserve makes a nice tale. In 1903 there was a homesteader living here on 80 acres. He was known as Alkali Al Thornburg. In 1903 a fellow came by wanting to ranch the area and he thought the water would be most helpful. Alkali Al liked the two mules and buckboard that the rancher arrived with and they traded; the land for the mules and wagon. It was the sons of the rancher who recognized the rarity and special characters of the property and worked to protect it. The Nature Conservancy, the federal government (Bureau of Land Management), and the State of California (Fish & Game and Dept. of Recreation) all aided in the final acquisition. It is a very interesting place and well worth a visit. You can always blend geology, biology, and human culture….. 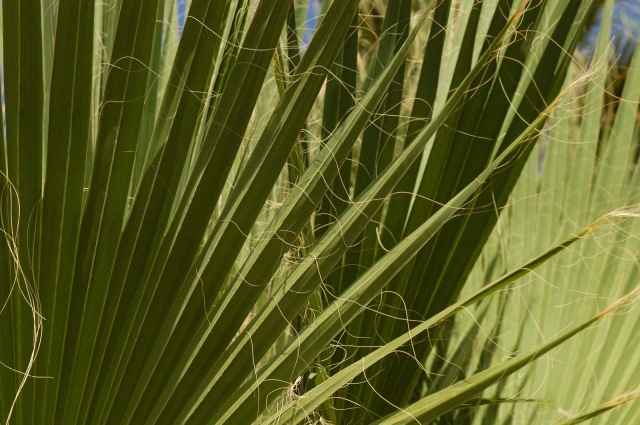 We continued on from The CVPreserve south on a remote road and eventually turned west into Indio where we returned to the sewage treatment wetlands and the Wild Bird rehabilitation place. We wandered the trails and climbed the towers. By now it was mid-day and the sun was hot – though we are in a lovely “cool” spell where the mid-day temperature is only about 84 degrees. There were fewer birds that during our last visit but it is always fun to watch Marsh Wrens and Ruddy Ducks.

Here are a few images from the wetlands. 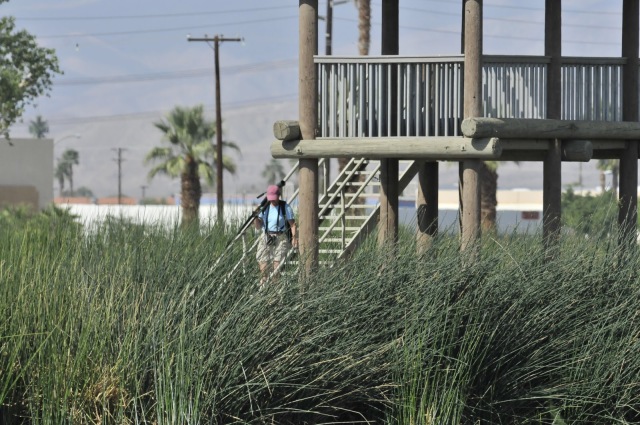 As I walked the perimeter hoping for photo-ops, Fran used one of the towers that are provided for birders and other visitors. There are probably not many other visitors to a wastewater facility however. 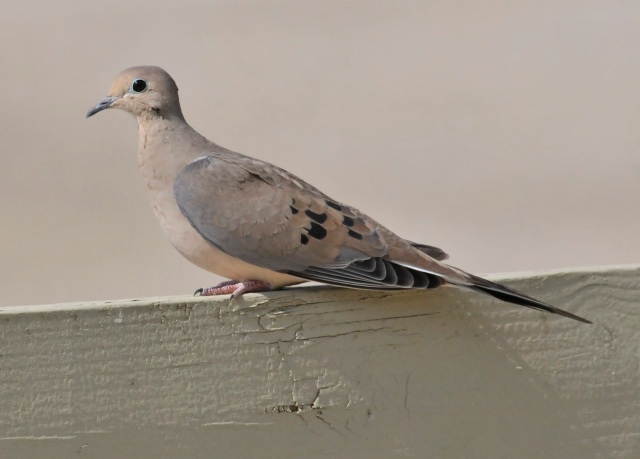 The Mourning Dove (above) and the Eurasian Collared Dove (below) are very common in Southern California. The MODO is native and widespread across North America. The ECDO is an introduced species and is spreading rapidly around the country – from many points where escaped pets and released birds have established populations. We had one in Chatham last year. 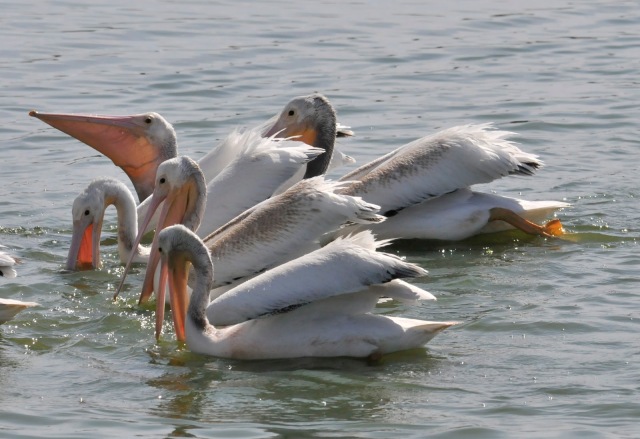 There are two pelicans in California; a sub-species of the Brown Pelican and these White Pelicans. As seen here they often feed in a line where they scare the fish ahead of them and the ends of the line act as barriers against end runs. As they approach shallow water they scoop the fish in their large expandable bills.

The two ducks (Shoveler above and Ruddy below) are much more common in the middle of the country and the west than they are along the east coast. Ruddy Ducks belong to a group called “stiff-tails” and the Shoveler has a broad will with something like an array of baleen around the edges to help capture its food. The Ruddy Duck is a diver while the Shoveler is a surface gleaner. 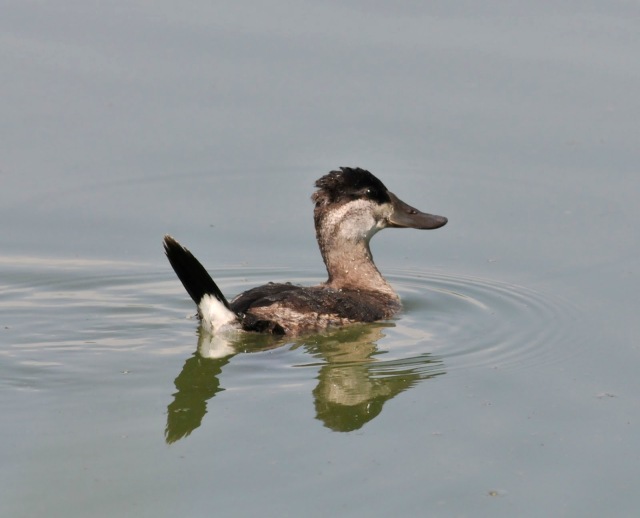 The last image for this post is an American Coot. The red eye and white bill make this charcoal-black bird easy to identify. They are found across the country and are more common in the south than the north. The coot is primarily a vegetarian though it will eat whatever happens by; they make goofy noises that can hardly be referred to as a song. 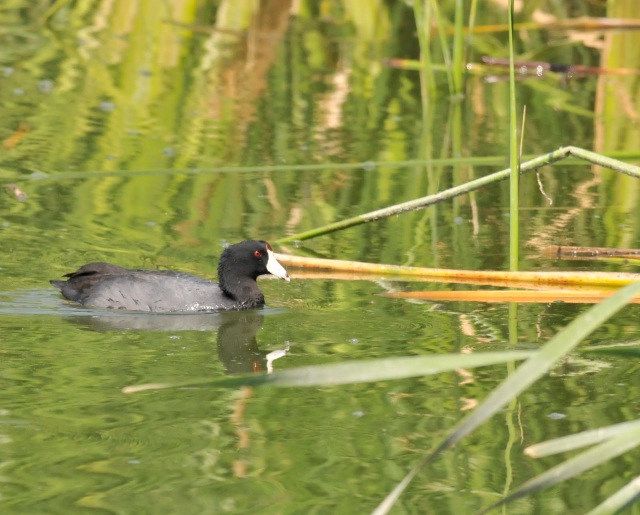