We are about to leave Alice Springs and Uluru in the very hot center of Australia heading for Sydney along the southern east coast.  It has been exceptionally hot here in the middle of the country with day time temps about 40 to just over 44 degrees centigrade. That is about 103 to 112 Fahrenheit. The skies are  clear and the wind is gentle. The mornings out here are pretty nice until about nine when the heat kicks in. The wind doesn’t help at all. It is glaringly bright and very hot. 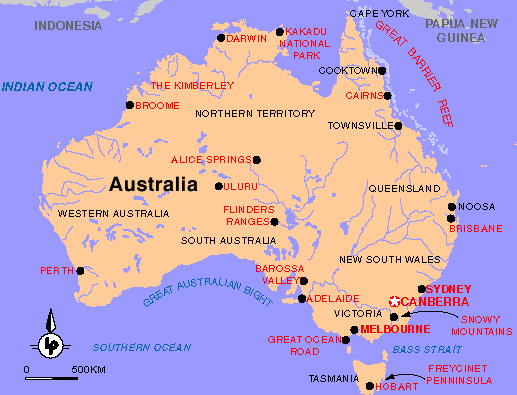 Alice Springs is a town in the center of the country about halfway between Brisbane and Perth on the east-west axis and Darwin and Adelaide on the north-south axis. About like Kansas City is to Los Angeles and Washington DC and then maybe Houston and Detroit. It is arid but not desert. The remnants of the ancient Petermann Mountain Range still trail across the ground. They form the MacDonald Ranges and provide red sandstone layers, now compressed to a hard glasslike quartzite rock, that has been pressed and bent by the earths ever-moving plates into vertical sheets. The mountains were formed about 500MYA out of sea sediments deposited as much as two billion years ago. Ancient stuff. The redness come not from the stone themselves but probably from iron molecules that are transported here on winds from the Great ore deposits to the northwest. The quartzite that has developed is mostly inert and very slow to decay. These remnant mountains will be around for a while; quite a while.

Much of the ancient mountain range is now worn down to modest nubs. They were part of a very tall mountain system and now look, as the aboriginal people say, like a series of caterpillars marching across the landscape head to tail. About 70MYA there was a burst of molten dolorite from in the earth that seeped and spurted into the weak areas of the range. The intrusions (dikes) have now eroded away leaving narrow gaps between the ranges (or caterpillars). These gaps were used by the first peoples as passageways and in some cases by specific groups for special reasons. That means there were gaps for men and different gaps for women, as well as for short cuts and travel ways. The landscape is divided into men’s business and women’s business area just about everywhere. The area might be called desert to make it easy. This desert is highly vegetated with acacias, eulcalypts, mulga, and various Spinifex grasses. 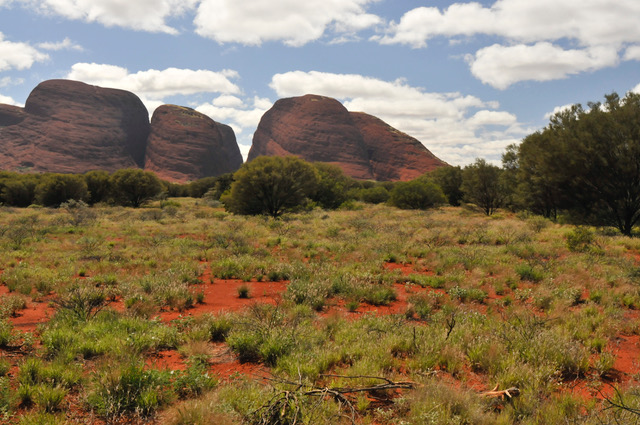 There are a few reptiles and mammals out here but the visible life is bird life – and not much of that in the hot air of day time. The mammals are pretty much nocturnal as are many of the reptiles. The occasional lizard can be seen but the big snakes and perentie and goanna lizards are not commonly seen in the day light. Birds are active in the morning and evening with much less activity between ten AM and five PM. However, there has been a great deal of rain here this year (about eight times the annual rate) so there has been a great deal of plant growth and flowering. This has encouraged birds to nest. The common species are very common at the moment. Species like Singing and White-plumed Honeyeaters, Willy Wagtails, and Zebra Finches are pretty common because of the recent weather.

On Boxing Day, the day after Christmas there was a one day rain event of almost ten inches, which is the amount usually seen in one year. When I was here a couple months ago the Todd and Fiske Rivers both had water in them, very unusual.

Our first day in Alice after landing has us driving up Anzac Hill to get a view of the town and the Ranges and then visiting the Royal Flying Doctors Service, the School of the Air, and a reptile place. The reptile place is a time filler and the other two are better but give you the feel they are fund raising. Both the RFDS and the SOTA are invaluable in this huge, remote area where the average ranch (station) is a million acres and often a hundred miles from the nearest town. Kids get educated over the web by teachers in an Alice studio and sick or injured are flown to needed medical aid stations in Pilates planes outfitted as emergency rooms. Both great services.

The town has a visible aboriginal population. There is little assimilation and quite a contrast in the life styles of the various people. The aboriginals can be linked genetically to people from Sri Lanka and are the world’s oldest cultural group by far. They arrived in Australia at least 40,000 years ago. That is well before Chinese cultures and about 35,000 years before agriculture in the Tigris-Euphrates River Valley. Though they were not a unified people by any measure, they were successful in a difficult environment and adapted as they needed. Forty thousand years allows for as many as 2500 generations. Generations that got better and better at living in Australia’s out doors. Perhaps some of those adaptations are responsible, through genetically induced behavior, for the remaining differences in the cultures. The aboriginal people may be suited for wandering, hunting, gathering, oral memory, and such, but what makes them good at those activities may limit their ability to live a sedentary life limited by cultural rules and actions that they never developed or experienced. Whatever, or however, the aboriginals remains noticeably different from the usual Australian in looks and cultural behavior.

We stop to eat at a local mall where our travelers can get a close look at life in Alice. The mall has locals of every stripe, stores of a modest level, and a couple places to grab a sandwich. It is a quick look at life in the Outback.

We then check into the hotel and give the folks an hour or two before taking them out to a bush barbecue where John and Cath entertain and cook, Tim sings, and Andrew does the stars. It is a fun night and this time the Southern Cross was high and bright, the Magellanic Clouds floating above us, and the Milky Way a pathway of billions of stars overhead. It was very nice.

The next morning we provide a three hour visit to an aboriginal setting in the bush where Con does a talk about local people, the local Arente women are painting on the ground, and bush tucker (food) and aboriginal weaponry are shown. It is a very good outing. We then head for Standley Chasm where we walk for an hour into one of the eroded dolorite cracks in the reddish quartzite rocks. Is a very narrow slot with walls a couple hundred feet high. The trail is up a drainage (rarely wet) past several types of eucalyptus and lots of rather local cycads. It is very pretty. There is a small entry building to this area and a lunch is served for us down there. There are nurse logs, termite-filled trees, magnesium-dioxide coated rocks and great views of the quartzite walls all along the walk. After this we head to Simpson’s Gap for a quick walk into a larger gap that has a little bit of water pretty much all the time. The return walk can be up the dry riverbed dotted with large Red River-Gums. Then back to the hotel with a short break and then dinner and a presentation by me.

The next day we drive, in a big coach, to Uluru where Ayers Rock is located. This trip has a couple stops at Road Houses for bathrooms and snacks and a chance to buy a frozen kangaroo tail (though no on ever buys one). We look over Mount Conor and the huge Amadeus Basin as we travel south and west. Soon we see the great rock fins a thousand feet above the landscape and by 1:30 we are in the hotel. But, rooms are almost never ready so we have lunch and then to the rooms for a very quick break as we head out into the national park at 3:00PM.

This trip my room was ready and close to reception and I got one of the free washing machines on level two and had a load of laundry washed and dried before our afternoon outing. We did start a tour of the area at three PM and went to the cultural museum and drove around the rock. Our driver is allowed to interpret what the aboriginals allow us to know of their creation stories and Tanya did a fine job. About forty minutes before sunset we go to a parking place for coaches (there is another for cars) to watch sunset on the rock. There are carrots and dips with soft drinks and champagne, cheese and crackers finish off the spread. It is kind of nice but there are hundreds of people there and the lot fills with tourist buses. We then drive back to the hotel for a very rich and filling dinner.

The next day, before getting on a plane to Sydney we visit Kata Tjuta or The Olgas. Uluru, Ayers Rock, is a massive block of hard sandstone and Kata Tjuta is a group of 36 conglomerate rock features about the same height as the rock. Much of this area is off limits due to men’s business but it is usually too hot to walk much anyway. It is an impressive site. 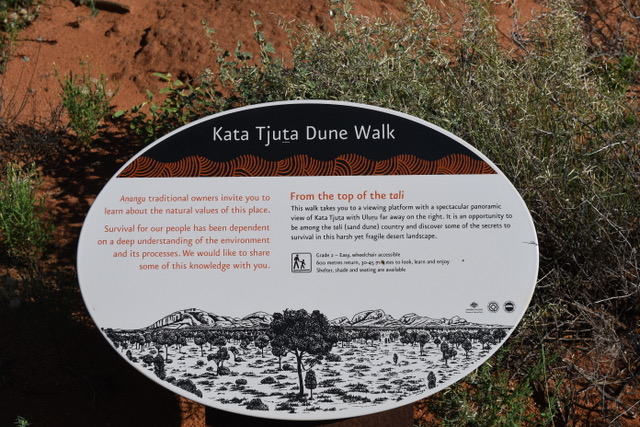 We then head to the Ayers Rock Airport and fly to Sydney. Tom, the luggage guy (originally from Nebraska) and his helper/buddy Udo meet our plane and gather our luggage. It is similar to what Dave does for us in Cairns upon departure. It makes things go smoothly although Americans get nervous if they can’t grab their own bag. The flight to Sydney is three hours and this time we used Virgin Australia, which is certainly a step up from JetStar, Qantas’ budget service which we usually fly. A couple people had to pay for an extra bag ($70!) but that is to be expected nowadays I guess.

The next installment will be written on the flight from Sydney to Christchurch in New Zealand and will describe our time in Sydney.