Skip to content
If you’ve been to East Africa you may have seen tens of thousands of flamingos; Lesser Flamingos mostly. Perhaps you’ve seen flamingos in Africa or in India; mostly Greater Flamingos. If you are a hard core birder you may have seen the other three types of flamingos in South America (James’, Andean, and Chilean). The flamingo of the Caribbean is now called the American Flamingo and is found in the islands of the Caribbean and Central America. This is the flamingo that has a modest population in the Galapagos Islands.
They are often quite colorful and looking beyond the color you may have seen the long legs, long crooked neck, funny-sharped bill or beak, and their rather stately way of walking.
On this last trip to the galapagos we were fortunate to come across ten very nice looking flamingos in a shallow lagoon behind the front barrier beach on the island of Santa Cruz. This access is from Bachas Beach which is on the undeveloped side of the island.

The birds were scattered but the lagoon is rather small and they were all in sight pretty much all the time from whatever vantage we used. Like the other animals of the Galapagos the flamingos are quite tame although less so that the populations that have been out there longer. 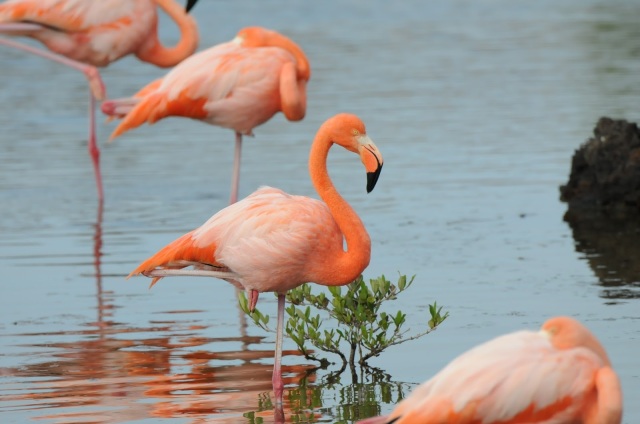 Modern taxonomy is moving toward a cladistic way of grouping (or separating) animals. There are still categories much as there have been since Linnaeus in the mid-1700s: Domain, Kingdom, Phylum, Class, Order, Family, Genus, and species. Actually Linnaeus didn’t use the category now called Domain as the life forms included in one Domain and part of the others, weren’t known during his life time. In a cladistic format those organisms that share a common ancestor are grouped with this organisms that share a characteristic from an ancestor form but that disappears in future forms.

The reason cladistics in mentioned is that is is always a surprise to learn that via a genetic study the flamingos are most closely related to grebes and are closer to the birds of prey than they are to the herons, egrets, and storks. The older taxonomy has the flamingos more closely aligned with spoonbills and ibises. The current tendency is toward waterfowl and grebes. One of the unifying characteristics with waterfowl is the Genus of feather lice that infect the birds. Flamingos have waterfowl lice so they are likely to share certain developmental characteristics with duck, geese, and swans. Stay tuned as taxonomist like nothing more than dissecting the family tree by refining their observations and discovering new relationships.

There is no sense in being this large and colorful if your not going to flaunt it. The flamingos walk slowly and with great attention to avoid splashing. They will ruff up the feathers to display their beauty and stature. This is, of course, what most birds do but a flamingo is so much better it than is a displaying male Red-winged Blackbird or  or even a Bobolink. 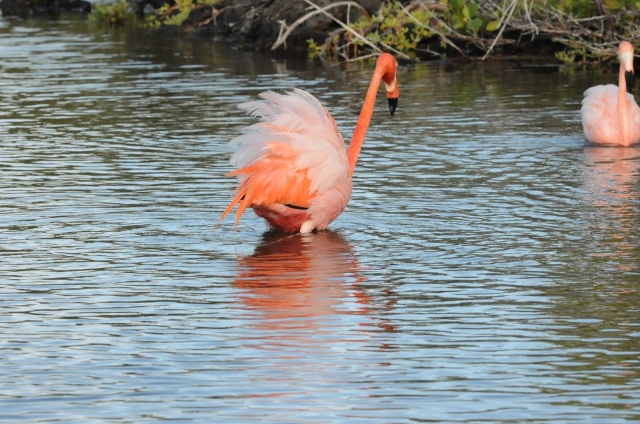 The color is derived from their food. It is often mentioned that their diet is selective and that may be true to some extent, but they do feed with their heads upside down and under water – so I doubt they are to selective. The selective part is to put themselves in shallow water with the right kinds (and density) of shrimp and algae that they need to survive; color is an afterthought. The carotenes that they ingest while eating are from the algae in the water. But the molluscs, shrimp and other crustaceans, and insect larvae all live in the same water and ingest the algae and thus have carotene in their bodies. You are what you eat.
The base feathers are a soft gray, readily seen in young birds, that are then colored by the carotenes in the diet. Flamingos can survive without being pink; it just means that feeding options are not quite right. color will return when the algae forms and the beta-carotene returns to the smaller life forms that everything feeds on.
I almost said lower life forms – that would (or should) open a door to important discussions of the various roles and rights of all living things on the planet.

Flamingos nest in a small tower built up in a shallow muddy pan. The eggs are laid (each pair lays one egg but the group all nests at the same time) in the conical top and is incubated for about four weeks. there are (maybe) 400-500 flamingos in the Galapagos.  They move about as they need rather specific feeding and breeding habitat and they cannot always find what they need on a single island.

These birds were on Santa Cruz but most of the flamingos are further west on the horseshoe-shaped island (the largest island) of Isabela. Sadly, the flamingos were a dietary delight for Roman emperors and they were killed in order to make a delicacy of flamingo tongue. The tongue is a large and strong organ in this group – see below.

The hooked beak is used like a bilge pump. The head is turned into the water with the forehead closest to the bottom. The beak and tongue then take in and squeeze out water. The small items that the flamingo desires as food stuff are caught in lamellae along the edge of the gaped mouth. Though not in the same scale it always reminds me of a baleen whale taking in water and fish or krill and then squeezing out the water keeping the fish. Or on a smaller scale the filter-feeding of sedentary oysters.
Flamingos can swing their heads back and forth as well a doing the tongue-pumping thing. Some of the penguins and auks are also strainer-feeders as is the duck known as the Northern Shoveler.