Much of the charm and interest in Namibia is based on the great dunes just inland from the coast. The names Deadvlei and Sossusvlei are but two of the many majestic and unlikely mounds of sand in this huge complex. The whole of the country is dry and seemingly barren. In the north the great Etosha pans are chalk. The Namib is largely sand. There are high erg (rocky desert plateaus) plains and exposed rock mountains. It is a geologist’s paradise. The vista swing from dry and hard to soft and sweeping. Many areas are layer upon layer of ocean-floor sediments and other areas are mountains of windswept sand. The roads also change from germanic straight to mountainous switchbacks with each curve opening a view onto another plain or dune ridge or sandstone cliff. 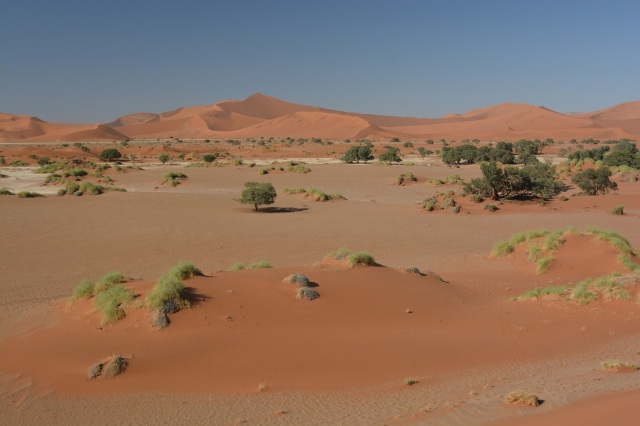 Some of the dunes stand just under 1000′ in height. 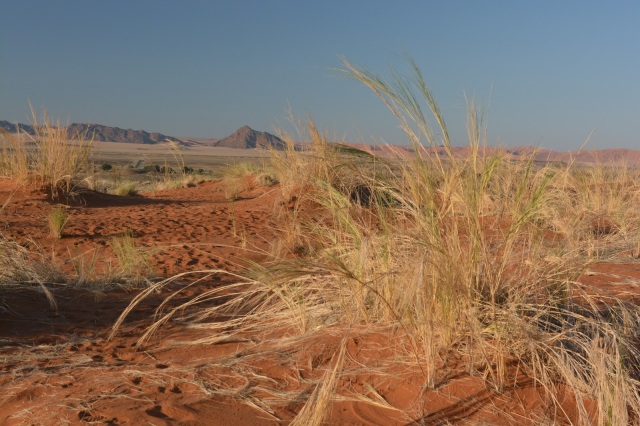 Many deserts are obviously formed by the occasional torrent, most have a surface that is smoothed by wind but few are actually formed by wind. The sand mountains of Namibia are a little of everything. If there are strong prevailing winds the sand is moved by wind. In other places dunes have been stationary for hundreds of years. In one area the dunes have become stonelike after thousands of years of immobility. 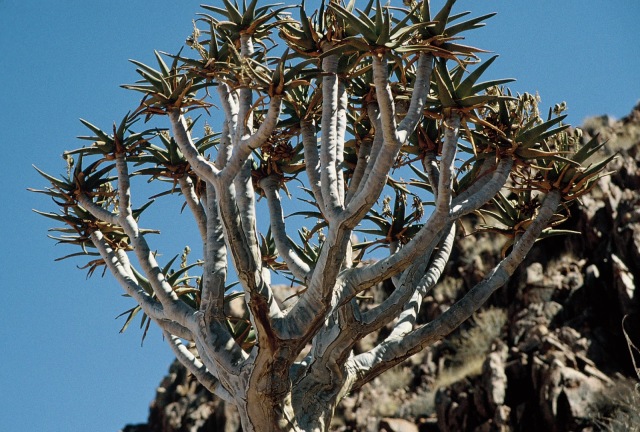 There isn’t much vegetation, but there is some pretty cool vegetation. There are grasses (shown three images above) and trees where there is soil and permanent (or regular) water. There are also many representatives of the plant group Euphorbia, a cactus-like group found in Africa and Asia.

The tree shown in the above two images are Quiver Trees; an aloe. The San (Bushmen) would hollow out a branch to use as a quiver. Near the town of Keetmanshoop there is a Quiver Tree Forest NP. Strangely, this is a nationally protected property but is on a private land holding. One of the trees there has a huge Social Weaver nest in it.

In North America and South America we have leafless, spiny, barrel-shaped plants with spines and photosynthetic skin called cactus (cacti). In this part of the world there is a group of leafless, spiny, barrel-shaped plants with photosynthetic skin and poison called Euphorbia. Parallel (sometimes convergent) evolution is the term for things that adapted to widely spread habitats and have evolved the same sorts of characteristics; like cactus and euphorbia.

The next blog or two will deal with animals of Namibia but the dunes have a cohort of creatures living within the seemingly lifeless terrain. There are many beetles (as there are everywhere) and the tracks provide a sense of travel and activity that is rarely witnessed. there are a few birds and reptiles as well. Surprisingly there are (very widespread of course) elephants, gemsbok (oryx), and lions in this demanding landscape.

The two landscapes above show that sand isn’t all the same. Some has iron in it and oxidizes red. Other has had tiny particles brought by the occasional rain over the centuries that now forms a clay-like layer in a hollow or swale. These depressions become shallow lakes when it does rain and some years the puddles will persist for many months.

The sand was formed from an eroding mountain range and washed into the Atlantic over the past several million years. Much of the sand now seen on the ground and in the dunes has been brought northward and then spewed onto the shore as the ever-active ocean, powered by the Benguela Current, moves sand all the time. In many ways the sand goes round and round: from land to ocean, northward to land again, southward by wind and back into the ocean.

The eroded canyon below is the Sesreim Gorge. It is a washed out area that shows river worn stones and many layers of conglomerate rock. This 100′ deep canyon was eroded by a flooding about two million years ago. It is an area of unlikely configuration but may give some indication of what lies under the Namib-Naukluft National Park.

The countryside is mostly ranch land, with very poor grazing; but a great deal is national park land. The visitors are allowed to walk through much of the area and experience the sand and wind on a very personal basis. There is a tractor and wagon that gets people out through the soft sand to the larger dunes. Even when going downhill there is no sense of a forward gravitational pull as the friction of each step is isolated from any larger movement. It is very pleasant and a bit surprising.