In 2010 there were 6,450 Common Tern (COTE) nests censused in the Common Tern colony located on the northern tip of South Monomoy Island, about three miles south of the Chatham Lighthouse. In 2011 there were 6,904 nests.

We just censused for 2012 and are a bit optimistic that the verified numbers will be higher; Kate Iaquinto, the US F&W Wildlife Biologist for the Monomoy National Wildlife refuge is estimating about 7,250 for this year. {The numbers are in — Kate Iaquinto, the staff biologist says there are 8105 pairs of Common Tern this year; 7762 on South Monomoy and 343 pair of Minimoy. There are only 7 pairs of Roseate Terns; 1 on South Monomoy and 6 on Minimoy. There were 441 pair of Laughing Gull on South Monomoy. The USF&W allows 1000 pairs of Laughing Gulls before considering controls.}

The Monomoy (Island) National Wildlife Refuge is one of the few wilderness areas in the eastern United States. It is described as a 7604 acre refuge but at low tide there is that much again and more exposed as sand or mud flats.

Directly south of the southeast corner of Chatham, Massachusetts there are several great bands of sand that keep the Atlantic out of Nantucket Sound as they reach down toward Long Island New York. These strands of glacial detritus form a variety of ever-changing barrier beaches. They have been there for centuries but never in the same configuration from year to year. This year, in 2012, the easterly barrier is called South Beach and reaches down from the Chatham Light several miles until it dog-legs west and connects to South Monomoy Island more than a mile south of the northern tip. In order to reach this connection it completely bypasses North Monomoy Island’s two miles of sand and dune. On the inland side, forming Nantucket Sounds’s western edge is a rather new bit of ground called Minimoy. There are now those four patches of land and associated flats; North and South Monomoy, Minimoy, and South Beach. 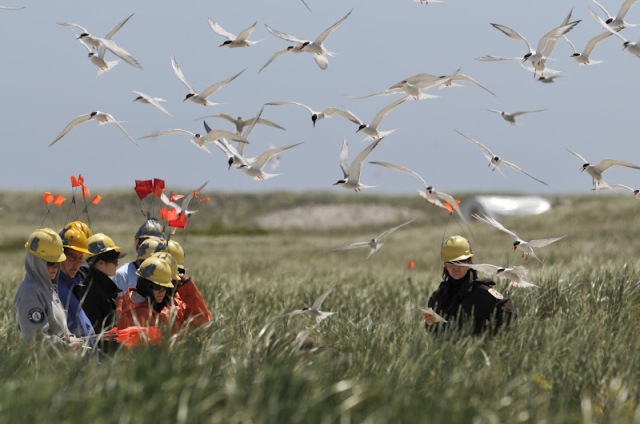 Monomoy’s history is a story in itself so I will jump right into the Common Tern census for 2012. On Friday and again on Saturday (June 15 & 16) the staff biologists (Kate Iaquinto and Stephanie Koch) led about twenty people into the dunes of South Monomoy. The COTEs nest on sandy patches within the vegetated dunes. American Beach Grass is the predominant plant species in the dunes and over the north half of the colony it is essentially a monocrop. The twenty people were divided in two groups which when censusing were two “lines”; shoulder to shoulder tip-toeing through a maze of nests and eggs.

The “line” in the picture above is decked out in hardhats with flagging extending upward. The flags and the hats help deter, deflect, and prevent the Common Terns from poking into your scalp. It works almost all the time. If you reach your hand outward or upward it is likely to get nipped. The line consists of the counters and the single person to the right is the recorder. The line moves slowly, counting and reporting. The recorder keeps the notes despite the physical and noisy assault by terns. 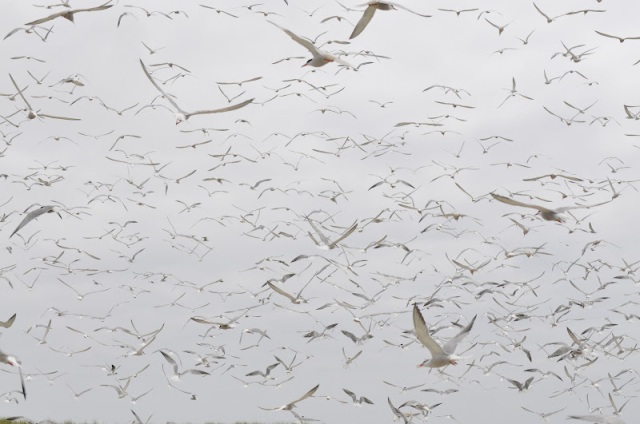 The birds nest colonially; often with hundreds of nests is a small patch of suitable ground. The ground on North Monomoy consists of Beach Grass meadows where the shorebird called Willet will nest, sparse areas of vegetation with exposed sand where the COTEs nest, and occasional patches of lush vegetation where the Laughing Gull (LAGU) will nest. There are almost no other birds out here at this time of year. But as you can see above, there are lots of Common Terns.

We were looking for areas where the Common Terns were nesting and then announcing the nest size by shouting out the number of eggs. In order to keep others from counting the same nest and in order to allow for recounts to verify accuracy we would put a possible stick in the sand next to the nest. And then shuffle on a few feet or inches to shout out another egg-number at another nest. The recorders were yelling back “got it” or “got them both” as we assaulted them with a barrage of numbers. All this while in a flock of rather angry, and hugely noisy, terns who didn’t see the management value of being censused. 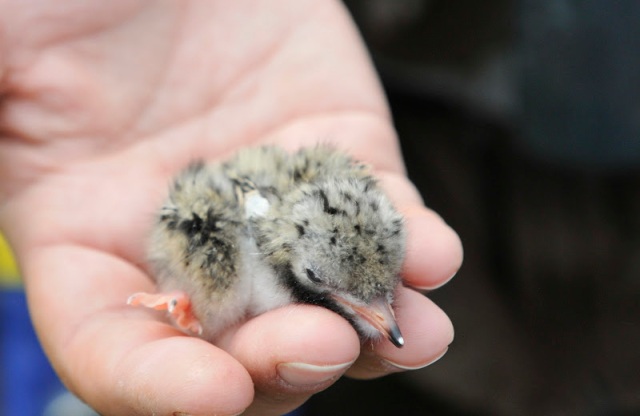 Occasionally we would happen on a nest with chicks though the census was timed to avoid chicks. The chick above still has its white bill-tip that allowed it to “unzip” its eggshell and enter the bright, sandy, noisy world of fish and flight. It must be a shock. Almost all of our nests had eggs, not chicks, and only one of the nests had fully hatched. The nests were usually two or three eggs; but some had one or four and there was one with five eggs. Fledging by Common Terns is considered good if four nests produce five flighted young; 1.25 young per nest or so. That means that more than half the eggs we counted will not become flying terns; they will be predated by: Great-horned Owls; Black-crowned Night-Herons; Laughing, Herring and Great Black-backed Gulls and occasionally mammals as well. The nesting choice of an island helps eliminate skunks, mink, foxes, feral cats, weasels, and eastern coyotes as predators – usually. The “line” I was on counted more than 2000 nests the first day and about 1300 the second day. At two to three eggs per nest that means that there will be about 7500 youngsters striving to become part of this noisy band of seafarers. There were at least an equal number counted by the other “line”. 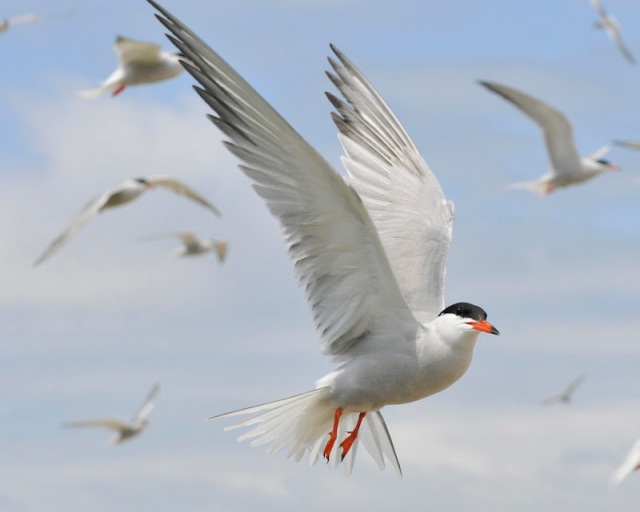 The birds were in our faces as we slowly walked the “line” through their nesting sites. Their behavior was certainly understandable. Their presence gave us time to watch them fly. Common Terns are extraordinary flyers. They are highly migratory and over a year’s time, with most of them nesting in the northern temperate regions of Eurasia and North America and then wintering as far south as Australia, New Zealand, Cape Horn, and Cape Point and lingering all all the shorelines in between they travel ten to twenty thousand miles each. While feeding young here in eastern Massachusetts an adult might make a half dozen fishing forays of ten miles each, each day, for the six weeks or so it takes for the young to grow and fly. Then they feed them at sea.

A Common Tern is 12-13 inches from bill to tail tip. The wing spend is between 30 and 39 inches. In most cases and at most times of year it takes four them to make a pound. Everything they do is done by a four-ounce bird. They can live in the wild for twenty to thirty years. Unlike humans, and most mammals, they don’t get older. Of course they get older but they don’t age. Each year is a repeat of the previous year; long flights, mating, nesting, feeding young, and many more long flights. You don’ become a gray-haired COTE and retire after a certain number of years. You live, behave, and repeat.