June 10th (2012) was a glorious day here on Cape Cod. It was also glorious about 25 miles east of Chatham in the Atlantic. The New England Coastal Wildlife Alliance had a fundraising WhaleWatch trip and I was lucky to go along as a sort of staff birder (thank you to Krill Carson and NECWA). We traveled straight and fast past Provincetown and Stellwagen Bank as there were few birds or mammals in that area and we made it well off Chatham by about 10:30am. There were pelagic birds and whales everywhere!

The whales in the (3) images above and below are coming to the surface after swimming through bubble nets that the whales created by blowing bubbles; and that that kept the Sand Lance confused and contained. The whales were not feeding very deep and bubble nets were made and penetrated, by mouth-open whales, in only a minute or two. There were places where four, five, and even six whales were participating in the bubble rings. As the light-colored bubbles ascended it was often easy to see the Sand Lance scurry about trying to form or reform schools or find a way into clear water where they could see what was happening. It was often frantic. 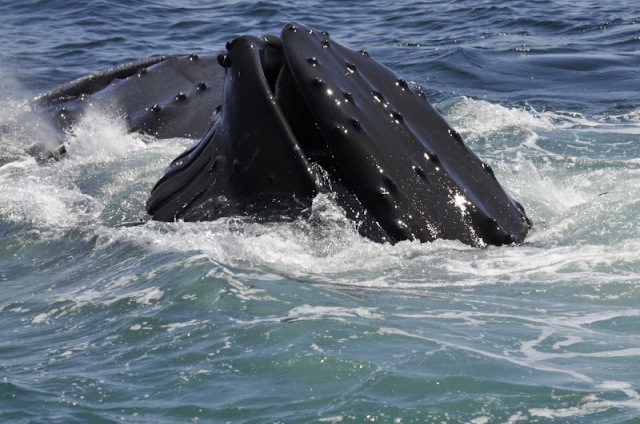 The whale above has taken in a huge gulp of sea water; hopefully full of Sand Lance. It will now squeeze the water out through the baleen and concentrate the fish. The pleats, or rorquals, are the pleated parts of the under throat and anterior belly can expand greatly. There can be hundreds of gallons of fish-rich water drawn in this ante room. Once the water has been forced out of the “gullet” the fish are swallowed down a rather small throat. Where we were Sunday, there had be millions of Sand Lance as there were whales and birds in profusion. A wet and salty buffet table like you rarely see. 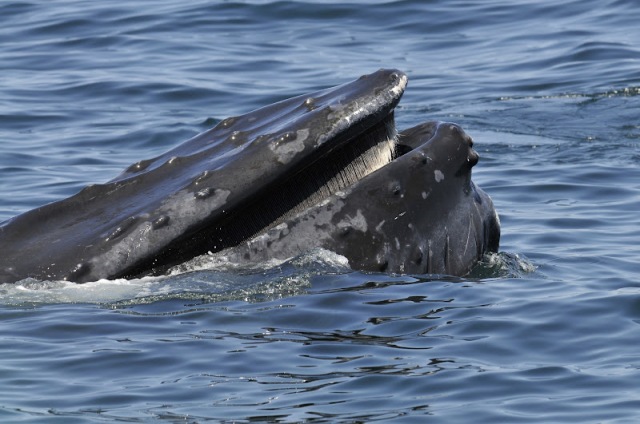 The whale above is moving forward allowing the density of the ocean water to push against the water-swollen gullet. This forces the water out and empties the holding chamber. All but one of the whales we saw were bubble feeding; but the water was so rich in food they may have been able to harvest their meal without using bubble nets at all. many of the whales fed alone but it seemed that many loose associations of bubble-blowing whales had formed.

The pleats are about three inches across in an adult and expand like an accordion or concertina. The bellies of Humpback Whales are often mottled and patterned with white. The coloration on the underside of the tail is also patterned with white and serves as a “fingerprint” for identifying individual whales. 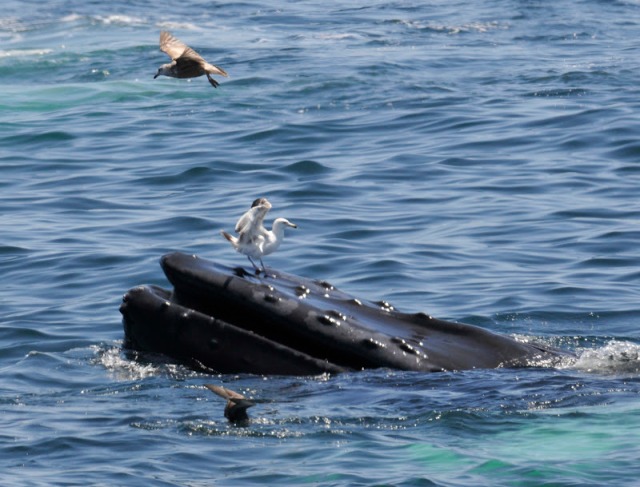 The birds in the above and below image show the relationship that develops between sea birds and the large mammals. It was not uncommon for hundreds of Sooty Shearwaters to fly to the rising bubbles. They knew a whale would appear and there would be a scattering of fish as well. In some cases that sat and waited occasionally on the whale’s snout as the Herring Gull above is doing. But more often that sat near bubbles and waited to snap up the frantic fleeing fish.

The image below shows another way to empty the load of water collected while fishing; gravity. By rising quite vertically the water drains out at the rear of the mouth near the hinge of the jaw.

As there were so many whales and birds out there on Sunday past, I plan on a few more pages to show the birds and whales in more detail — stay tuned.