As winter wanes in New England the right whales appear*. They are here coincidentally with a bloom of zooplankton that seems unbothered by the still-cold waters. The whales (and the zooplankton) usually appear in March and move on by mid-April. This year there have been a great many Atlantic Right Whales (more than 200 – almost half the world’s population) and they have been very close to shore. The images that I show below are from 22 April. On this outing we had whales right at the Provincetown breakwater and about 65 whales without getting more than half-a-mile from the beach.

The Right Whale is not as showy or active as the Humpbacks that will soon arrive. So, most of the images will be of modest chunks of whale in a dark gray-green ocean.

Right Whales have large growths on the head (and what might be called a neck) called callosities. These are patches of roughened skin inhabited by whale lice or cyamids. The whale lice are very light-colored, hence the whitish look to the callosities. These growths extend a short distance rearward from the head. There is no dorsal fin on the broad back of a right whale. The whalers of the 15th, 16th, 17th, 18th, and 19th centuries referred to this whale as the right whale because it was the right whale to kill. They travel near shore and due to a large percentage of their bodies being blubber, they float when dead. Thus native peoples in small boats were often able to hunt this whale with great success.
They are surface feeders and simply cruise along the surface taking in the slurry of zooplankton-rich sea water. The zooplankton is captured in the baleen as the water is forced out through the baleen back to the sea. This baleen mustache is licked clean by the tongue and the oceanic pudding swallowed. It seems an unlikely way for a huge animal to feed but that is all they do; really.

Right Whales have a large arching mouth; with a narrow upper jaw and a large curving lower jaw. There are about 300 baleen plates that look like a very large and very fuzzy comb. The inside edge of the baleen is fuzzy (think split ends) and can capture very small prey. Using the Google-derived image above imagine the mouth closed so only a small opening exists in the very front. That is how they swim in food-rich waters. The baleen is not all the same length; but much like piano or harp strings they lay together in a harmonious sweep from small to very long; the longest plates of baleen on an adult whale will be about 9′ in length.
They are a rather tubby animal overall. The largest Right Whales can reach 60 feet in length and weigh up to 100 tons. Most of the adult members of the Atlantic population are about 70% of that size; 36-45″ and 50-70 tons. About 40% of the body weight is blubber.
The flukes and fins (there is no dorsal fin remember) are broad and appear stubby to those who have seen Humpback Whales. The blow from a Right Whale is very much V-shaped and low. The two blowholes are rather widely spaced and large; hence the low, bushy-shaped blow. 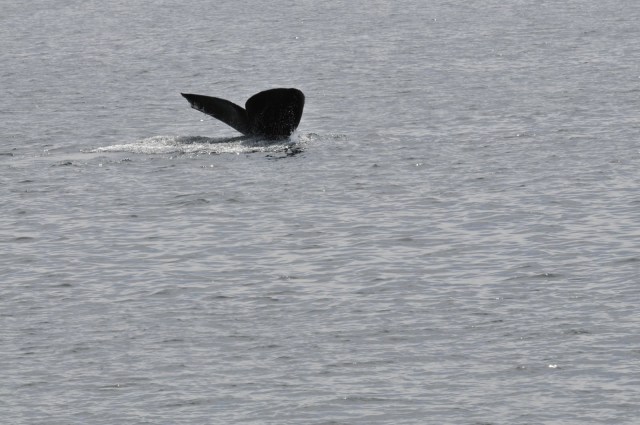 The image below shows the small upper jaw completely and the arch of the lower jaw.

The two images below are from a Humpback Whale. The baleen is short and the jaws meet in a flat line, like a toilet bowl and its lid. The longest baleen of a Humpback is rarely 2′ in length. The upper jaw of the Humpback has a flat appearance with large rounded bumps, not callosities. Each of these bumps harbors the whales only hairs; baleen is not hair though it is hairy. Baleen is much more like fingernail than hair.

There seem to be three distinct populations of Right Whale; the North Atlantic, the North Pacific, and the Southern. Now that DNA can be used as a forensic tool it is believed that these populations have been separated from each other for 3-10 million years and are in fact separate species. They are studied in the same way that the Human Genome has been used by National Geographic to look for genetic markers in humans to help determine when and where ancient relatives moved to and from.
The three images below are of Southern Right Whales taken off the coast of Argentina a year or so ago near Peninsula Valdes, an area where calves are born. The Southern Right Whale is found all around Antarctica with calving locations northward into the warm waters of New Zealand, Australia, South Africa, Madagascar, and South America. The population probably totals 12,000 or so. In looking at the images it is easy to see that the populations share ancestry. It is now a matter of geography that keeps them apart. There is no way to know in what manner an animal from one species would be treated by members of any of the other populations. Perhaps they are still similar enough to recognize each other – perhaps not.

The callosities and blowholes of the Southern Right Whale are very much like those of the other populations/species. They are obviously from the same ancient lineage.
* Actually coastal New England has a late winter that wanes in March and then lingers for another 10 weeks or so without much change or improvement. We have a lot of cool gray weather; influenced by the sea and storms from both the west and the east. In that opening phrase I did not mean to imply springtime with flowers and singing birds. It is merely a time where the precipitation is in drops and not flakes.