The ride from Alice to Yalara, where Ayers Rock is located, takes a solid five hours; longer with stops. I think it is a great ride and today was very special. The road south from Alice is the Stuart Highway and the road west to the rock is the Lasseter Highway. There were two right hand turns during the six hour ride.


The rains have everything in the desert green and flowering. There are green leaves and flowering stalks everywhere. It is pasture-like and very pleasant on the eye. Of course this is balanced out by the small, narrow, spiny leaves of desert plants. They don’t just become oak-like because it rained – but anyway it is very pretty.


There was water in most of the dry rivers and the lake system near Mount Connor, called Lake Amadeus, had many of its salt flats covered with shallow water. On the way to Sydney we will fly over Lake Eyre, a great salt flat in central Australia, that gets water in it maybe once a century. It is now partially wet and likely to become full within a couple months. The image below shows a thin stripe of blue in the center – that is the rare Outback sheet of water. Incidentally, Mount Connor looks like a toothbrush lying (for a couple miles) across the desert. The handle is a long low ridge and the mesa forms the brush end. Mount Connor is on the Curtin Springs Station (ranch) and is not reachable unless you are on the ranch land. Oh yes, the ranches here are huge – one is the size of Florida and they are all measured in hundreds and even thousands of square kilometers!

The above image was taken along the Lasseter Highway about 40 miles out of Yalara (the official name of the town where  Ayers Rock resides) and shows a thin line of blue in the center where water was in the shallow salt pannes. The Lasseter Highway is bounded on both sides for mile after mile of what were once shallow lakes. There is rarely water anywhere along this road. During the low waters of the ice age just passed this whole area was dry but during ther high waters before the ice age the sea reached into this shallow basin many times. This is similar to how the sea reached into southern California at the mouth of the Colorado River – for instance the Salton Sea was part of the Sea of Cortez at one time.
The sunset at Uluru was very pretty what with clean air and a clean rock. There was no haze and no dust, and no rain – just the usual 1000 tourists lined up enjoying the end of the day. Tonight it was very cold and windy at sunset.
About 12 miles from Uluru is Kata Tjuta or the Olgas. These are huge conglomerate rock heads towering over the desert plain, there are about 36 in all, sitting in a jumble like a pile of discarded billiard balls. They are very sacred to the local Aborigines and the 36+ mile ride to get here is because we have to go around so many sacred sites. The stories of these sites is not known to any white people – even today – as they are culturally important and integral stories known only to the older aboriginal men.


There is a walk between two of the larger rocks that offers a sense of the place. The wind whistles and the bare rock rises over you as you walk across the welded conglomerate pavement. There is a wettish seam that runs down the crease between the rocks and these are treed with tall gums. The look like bonsai against the enormity of the rocks.
The desert is quite empty of wildlife; especially if you don’t count the birds (a few) and the flies (a lot). The flies are creatures of the warm summer days and can be very thick. They don’t bite or land on your food but seem to be seeking moisture from the skin. They are very found of your eyes and the corners of your mouth. It is very likely that a day outdoors in fly-season will allow you the chance to swallow one or two. The most rain ever measured in a month here was last month. There are freshets, pools, and wet river beds. The wettest weather of the year is supposed to be in the next three months so maybe the rivers will really flow at some point. We have had flowers, shrubs, and trees in bloom. There are birds feeding young all around. It will be a good year for raising young. If next year is dry only the fittest will survive.

The three images above are of Ayers Rock at different times. Though the sandstone was laid down in layers (up to 900,000,000 years ago) the layers are not very distinct in the now twisted exposures. The layers are vertical today. The rock is about 2.2 miles long, 1.4 miles wide, and 1140′ high. It is huge and there is no way to show that…..

The three images above show:
top- one of the flowering shrubs, with a rather usual flower form for Australia. This is something like the Banksia (bottle-brush) flowers; each with many many florets. These flowers and their rich nectar production has resulted in the evolution of dozens of nectar-eating birds down here.
middle- A small group of Eucalypts (ghost gums) against the backdrop of Ayers Rock.
bottom- One small section of the rock with modest erosion in the sandstone.
As for Kata Tjuta images – I will insert a couple. The size of these rock (1100′ high at places) cannot be sensed from these photos. The rock are pudding-stone, a conglomerate. They are welded together by muds and consist of large stones as well as smaller ones. the large stones are the size of bushel-baskets and basketballs. 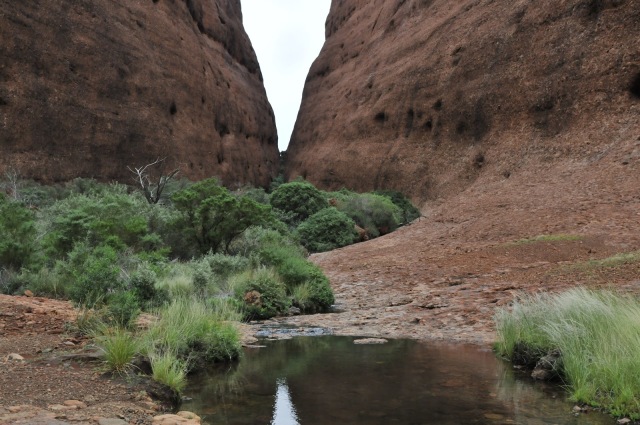 Below is the “coffin bus”. There is a German company that takes you around and you sleep in the pullout trays that are represented by the 26 small windows in the back half of the coach. It is actually crowded in the day time as well as there is seating for only 26. If I were the driver I’d rent a room each night. 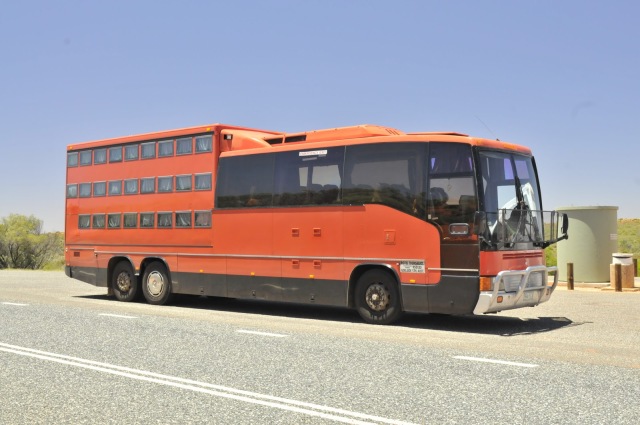