In days of yore the Palos Verdes Peninsula was an island off the mainland of what is now California. All sorts of organisms lived there and many found it inconvenient or impossible to commute to and from the mainland. These populations became suited to the island and began to differ from the source populations. Recently (2-3 million tears ago) the island has reconnected to California and is now valuable real estate in the heaving urban sprawl of Orange County. The creatures of the once-island still differ from their neighbors, though not enough (usually) to be called separate species.

The signs of ancient sea beds are evident and the twisted, tortured, pressure-packed eons since they were laid down are also implied/shown. The cliffs along the coast are not very high, maybe 200′ at the highest, but they tell a great story of time and change. This area was uplifted as the Pacific Plate crashed eastward into the North American Continental Plate and the forces were extreme and are now evident. It is pretty exciting (in a slow-motion sort of way) to picture what happened here. The rains of the past week have caused significant erosion of the surface material. Parking areas, roads, and beaches were coated with new stuff; mostly a sandy or silty layer. The action of the rain (and wind and sun) are easy to see on a day to day basis but the internal pressure of tectonic plates is hard to imagine – but the results are laid out for all to see.

Today we looked over the cliffs of Palos Verdes onto the shallows of the coastal kelp forests and out toward the island of Santa Catalina. The twisted layers of sediments are spectacular and the hazy views of the Pacific were pleasant. We traveled through Palos Verdes, Rancho Palos Verdes, and then on south back to Newport Beach. It was a slow-paced day with some great sights. The parks of Orange County are quite nice and there are smaller parks in most towns. It is a nice counterpoint to the very impressive residential and corporate landscape.

The Heerman’s Gull (above) nests in the Sea of Cortez and is a California bird after its breeding season. They are small and very similar to the Dolphin Gulls of Tierra del Fuego.

The Black Oystercatcher is a large shorebird of the rocky coast. They pry open shells and scrape crustaceans from the rocks. This species is found (in one form or another) all the way south through the South American coast. 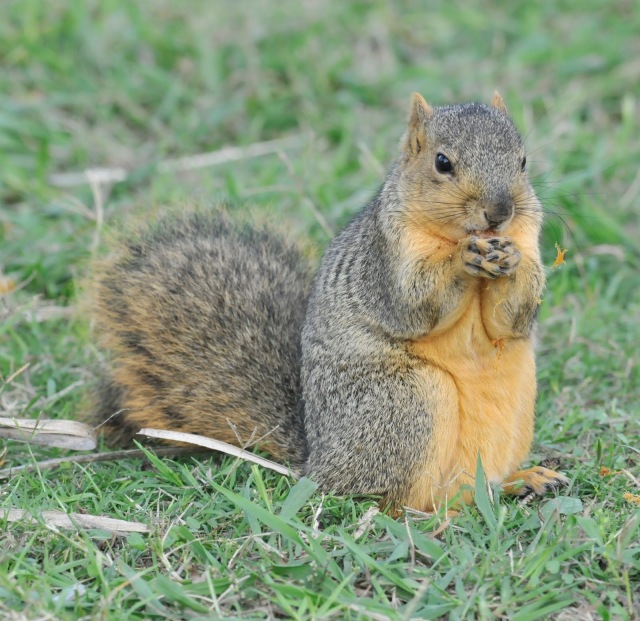 The squirrel is probably some color form of the Fox Squirrel – or at least that is what it looks like. For those who may care, I’ll research it and add corrected information if needed. Most of the squirrels here have been gray and red (like through most of the country) and ground squirrels of all sizes and shapes. This one was a bit of a surprise.
We have had three days of gloomy weather here on the coast. It has been in the 60s early and 70s by the end of the day. The sun has not been a regular companion. We have been out every day and have seen a lot but maybe would have enjoyed a whole day (or two) up in the Anza Borrego Mountains. There is always next time….