Skip to content
The town of Palm Desert is east of the San Jacinto and Santa Rosa mountains, yet only about 50 miles from the coast and has a myriad of destinations for both star-watchers and bird-watchers. The streets are named for luminaries of yesteryear; starting with Fred Waring* and on through Bing Crosby, Martin Landau, Elvis Presley, Monty Hall, Gerald Ford, Frank Sinatra and Carol Channing. These are towns of Palm Springs, Cathedral City, Desert Hot Springs, Rancho Mirage, Bermuda Dunes, La Quinta, Thousand Palms, and Palm Desert which were built and made famous by many of Hollywoods biggest names of the fifties and sixties. The desert now hosts an almost obscene number of spectacular golf courses and more than enough people and industry to tax the available ground water. However, it is a lovely area (despite the heat) and the towns are well designed and laid out.
(*The house we rented in Idyllwild was owned by Bill Waring, Fred Waring’s son. On the living room wall was a poster of Fred Waring and the Pennsylvanians showing the band and the singers. The poster was sponsored (as was the early television show) by Old Gold cigarettes. The caption on the poster said “Old Gold – a great tasting smoke, not a cough in a carload”.)
The weather for today was described as “cooling” and was not expected to go over 96 degrees. With that in mind we put off visiting the Salton Sea and headed out early and made a long day of the Joshua Tree National Park and the BLM land called Big Morongo. It was a great day. Joshua Tree covers two distinct desert types; the low elevation Colorado and the higher Mojave. The Colorado is a rather dull place compared to the Mojave. In the Mojave there are great rock piles and giant lilies known as Joshua Trees. The Colorado Desert has rocks and creosote Bush and not much else. Neither desert is bird-rich though both have lots of reptiles. Big Morongo is a narrow canyon that has water close enough to the surface to keep a long group of cottonwood trees alive and is a well known birding destination.

In the Serengeti of East Africa there are random piles of rocks that are called kopjes. Just like the great arrays of rocks in Joshua Tree these kopjes formed when molten plumes forced their way up from inside the earth. They never made it to the surface. the rocks here were about 15-20 miles short of the surface when they ceased moving. Then, and for millions of years, they were gently pressured by the lands around them and eroded by water descending through the earth. eventually the dirt above them eroded away and they were exposed. By this time this (monzonite) granite was worn and cracked. In some cases the rock looks like a loaf of bread and in others it looks like a pile of partially molten ice cubes. Erosion continues…. in Joshua Tree and in the Serengeti. 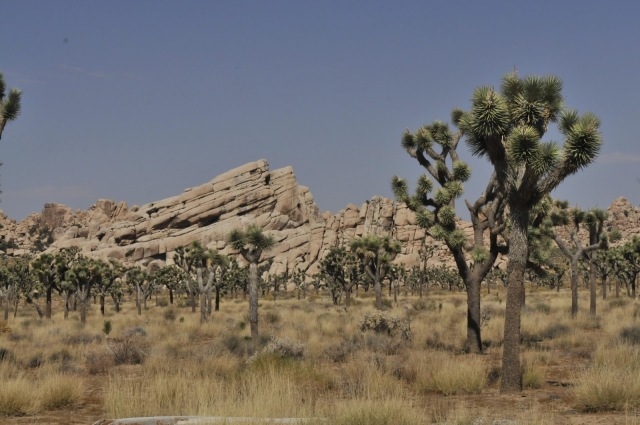 The Joshua Trees are a hoot. Very limited habitat and rather specific adaptations to soil, rain, elevation, and heat. There are fun to drive and wander through. 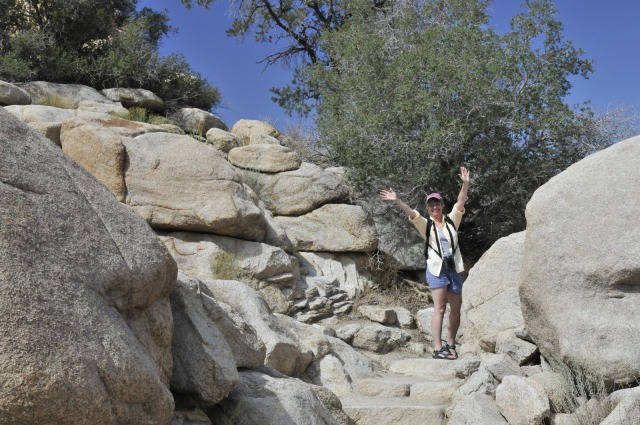 The day in Joshua tree NP was long and great fun. We went on to Big Morongo Preserve at the end of the day and had a great time watching hummingbird feeders with the host. Big Morongo is a BLM site with nice trails and lots of trees. It attracts birds that like insects, shade, and moisture.
The next blogs will be on the Salton Sea day and then one with bird photos – stay tuned. As wi-fi is not always available I will sometimes do 2-3 at a time.