Skip to content
Many of you know that I have had the very good fortune to be a travel guide for nature trips. It is a job that I should pay to do. I get to travel, visit, and learn about things and places that most of us can only dream of. Thirty trips to Africa and probably the same number to South America and the odd addition of visits to Sumatra or India or Iceland have peppered by life. I do the nature for the general population of travelers, in some cases the groups are birders, but in most cases they are travelers (mostly American) and I add a natural history base to their outing. It has been a wonderful opportunity.
Over the years I have written hundreds of pages of travel notes as a way of communicating the sights, sounds, smells, personalities, and activities of each of my outings. Generally these were saved and printed for Fran to read. Over the years I dreaded emails as they often caused me to have to write two sets of notes; one for immediate reading and one for the printed version. On a recent outing from Morocco to the Cape Verdes and on to Brazil, Argentina, the Falklands and ending in Ushuaia I sent emails to interested parties and sort of dropped the trip note format. I have since decided to start a blog so that you can read about (and see images from) my travels if you want to. The good thing about a blog is that I can do the same work and those who want to check it out can easily do so. Conversely, no one has to look at the site.

So, let’s get started.

This is the first of the blog entries for a few weeks of travel in October and November of 2010. Fran and I are in southern California as of the 8th of October and we will head right for the San Jacinto Mountains hoping for cooler weather than the desert or coast offers. The heat here has been running well over 100 degrees during the last week or so.  We may change plans to avoid the heat if it persists.

Joshua Tree and the Salton Sea are notoriously hot anyway – so we may head up the coast toward Morro Bay and Monterey if things stay hot. Last year we were in North Dakota for vacation and some birding – I think this will be quite different. No more empty roads and small towns. {An aside on Fargo, North Dakota. We were very surprised, after watching the movie, to find Fargo to be a wonderful small city. The streets, mile after mile and all the side streets, ran under canopies of American Elms. It was a fairy-tale scene. For those of you in most of the country, the American Elm grows into a champagne glass shape when mature. Maturity is now a rare thing as most elms have disappeared as victims of the widespread Dutch Elm Disease. But in Fargo they were majestic. Oh yes one other thing; Fargo has parkland along its river side. Thus when we hear of all the flooding in Fargo it usually floods only the open space and not the homes. The press was covering a rather non-existent flood when we were there. It does flood residential areas across the river in Minnesota though.}

So, here we are in the hot desert town of Palm Desert. In the old days it was Palm Springs that was the draw to this area – now the area is a long chain of towns (Palm Springs to Indio including Rancho Mirage, Palm Desert, Indian Wells and a few other spots) with, probably, Palm Desert as the nicest right now.

As good birders ought to do we visited the sewage lagoons this morning. They have created vegetated wetlands and built observation towers in the outer reaches of the treatment facility. It was nice to be amongst Sora, Moorhens, Shovelers & Redheads, White Pelicans, Pied-billed & Eared Grebes, and hundreds of mallards, Coot, Cinnamon Teal. 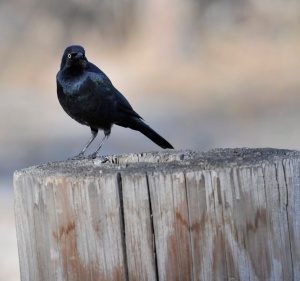 One thought on “California”